A new LGBT-oriented day tour of Jerusalem, titled ‘Jerusalem of Pink,’ offers an insight into the history of the LGBT community in the city. 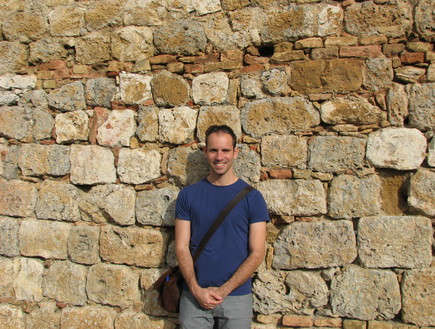 “It’s a tour that focuses on the history of the LGBT community over the past 150 years,” Yotam Zeira (in the photo), who initiated the tour and serves as the tour guide, explained to Mako Pride. “The tour tells the story of LGBT people who lived in and visited the city, their love, their dreams, their fears and their social activism. During the tour I try to show how gays were humiliated in the old city of Jerusalem in the 19th century, what was it like to be a lesbian tourist at the beginning of the 20th century, how people dared to write a gay love story during the British occupation of Israel, and more.”

The tour is based on literary pieces, poetry, diaries that have been kept and research that has been done, and it starts at the old city and gets to the center of today’s modern city. In the last part of the tour, Zeira tells the story of how the LGBT community in Jerusalem was formed, their fights and their prides. The tour ends at the Open House in Jerusalem.

Salon Shabazi – A coffee shop on Shabazi Street that describes itself as a community/social center that inspires creativity. It’s a good place for gatherings. Most of its regulars are students and artists.

Nocturno – A coffee shop at 7 Betzalel Street that has existed since 1995 and serves as a home to all those who like the warm atmosphere of the
Nachla’ot Neighborhood.

Hamarakia – A place that specializes in soups, but not only. Located at 4 Koresh Street. You can find an amazing variety of soups, but also fresh hummus, laban and a variety that changes often. “This is a place where everybody feels comfortable,”explains Noam, one of the place’s owners. “The
place is very gay friendly and vegan friendly, but the thing is that it’s overall a friendly place.”

Video Pub – a new straight-friendly bar at 1 Horkanus Street that plays all kinds of music, from indie and New Wave, through ethnic and pop, with parties on the weekends. It contains three small spaces – bar, dance floor and balcony, and the design is all about video cassettes and movies, in addition to pictures of LGBT icons on the walls.