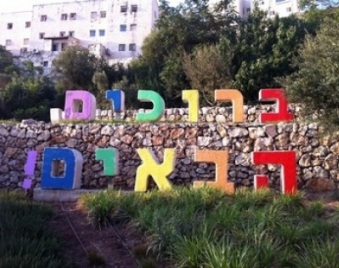 Jerusalem was painted in all the colors of the rainbow on Thursday to mark the city’s annual gay pride parade. Hundreds of participants swarmed the streets of the capital, holding signs marking the 10th anniversary of the parade.

Hundreds of police officers and Border Guard officers are securing the crowds.

Jerusalem Open House Executive Director Elionr Sidi said that the march “was an opportunity to reflect on all the changes that Jerusalem has undergone in the past decade.

“We no longer see incidents like in 2005 and 2006 of incitement, stabbing and riots against the participants. Despite these changes, there is still a lot to be done for the members of the proud community,” she added.

“We have yet to reach normalization. There are still violent incidents and it is still more difficult to be gay or lesbian in Jerusalem than it is in Tel Aviv,” Sidi noted.

Adam Rousso, 26, who was stabbed and moderately injured during the gay pride parade march in 2005, told Ynet that he has attended every precession since the incident. “We were expected to stop being proud of who we are. I understand this request and can promise that it will happen the day that they stop expecting us to be ashamed of who we are. I feel that this day is approaching.”

Earlier on Thursday, residents reported that the block letters making up the sign at the city’s main entrance were painted in the colors of the rainbow flag.

City officials said that the “initiative” was probably that of members of the local gay community, ahead of the parade. Police is investigating the incident.

The parade has been a strong point of contention since it first took to the capital’s streets.

Haredi groups, who staunchly oppose the parade, are planning to stage protests against the event and police officers are gearing up to secure the march.