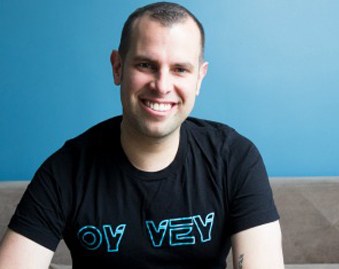 What do F. Scott Fitzgerald’s Jay Gatsby and Jayson Littman have in common? Jay Gatsby might not have been gay or Jewish like Jayson, but they both know how to throw a party. Obviously, Jay Gatsby is a fictional character, but New York City’s gay Gatsby Jayson Littman is very much real. The founder of party promotion organization He’bro was has just been recognized by the Jewish Week on the 36 Under 36 list of young forward-thinkers who are helping others by, “broadening the Jewish community.”

While Littman is at the top of the gay and Jewish communities, that hasn’t always been the case. Jayson grew up in an Orthodox Jewish family – and from the beginning he was taught to turn to God when the going got rough. He went to Yeshiva, and after graduation he spent time in Jerusalem where he began to realize that he was gay.

The out and proud Jayson we see today didn’t reach a point of personal acceptance immediately. It took him five years of attempted reparative therapy in the Jewish ex-gay program JONAH to realize that being gay wasn’t something he needed to fix. By remembering his upbringing, and turning to God, Jayson decided it was time to start combining both of his identities to help others feel as comfortable as he now does.

“Being gay means to me as much as being Jewish means to me as much as being American means to me,” Jason explains. He specifically emphasizes the importance of being proud of all aspects of one’s identity. “I find so many times that people from faith communities come out of the closet and replace that void in the closet with their Jewish identity,” he explained. “It’s important for us to fully reconcile all the parts to ourselves – gay and Jewish – in order to be fully healthy individuals.

It’s apparent that Jayson is dedicated to combining all aspects of his identity, and because of this, he is passionate about creating a space for other gay Jews. From his gay Jewish parties with He’bro that have been known to draw an upward of 1,000 attendees to his work with A Wider Bridge – an organization that organizes LGBT trips to Israel – Littman is dedicated to creating a space for other LGBT Jewish individuals like himself.

Read the full story on GLAAD