Although he is not Jewish, James Moon, a partner with the law firm Meland Russin & Budwick, P.A., makes the case that progressives and LGBTQ in particular can and should support Israel – the only country in the Middle East where LGBTQ can find hope for a valued and respected life. That’s the main reason why he decided to join A Wider Bridge’s Board of Directors. 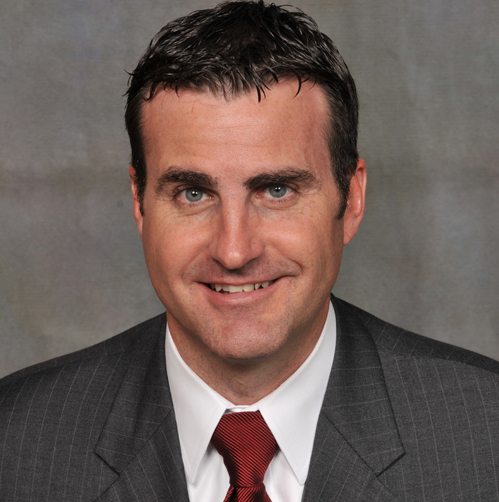 “I am interested in the rights of LGBT members worldwide, and especially in the Middle East, where they face significant challenges just to live their lives, contribute to their communities and love who they want to love without fear of persecution, violence and even death,” James explains. “I support Israel because it is the only country that could even arguably give LGBT a chance to be themselves, and because of that I want to see the LGBT community in Israel thrive and continue being the most colorful threads in the remarkable tapestry that is Israeli society. I consider LGBT in Israel to be my kindred spirits. I love them without having ever met them, because their struggles are my struggles.”

James has recognized Israel’s special place in the world since he first learned about it as a boy. Born in Jacksonville, Florida, his father was a policeman who was killed in the line of duty when James was only 2 years old. His mom remarried another cop and he died by the time James was 5. James, his sister, and their mom then moved back to Texas which is where he grew up , and needless to say, it was not the best place to grow up as a gay kid.

“I came out while in my early 20s while I was in the Navy. I was dating a news director of a local TV station, and my mother was paying my bills while I was on deployment,” James recalls. “My submarine pulled into Puerto Rico, and I called home to find out how things were going. My mom started questioning me about my telephone bill, and charges to a certain number that she did not recognize. She demanded to know who I would be calling so much. She was convinced I was seeing some woman that I was ashamed to introduce to her. I told her it was none of her business. She threatened to call the number and find out who it was. The number happened to be a direct phone line to my boyfriend’s phone in the control booth at the news station, so I was worried she would call and cause problems for him and me. My sister knew I was gay, and she was at Mom’s house while this conversation was occurring. She grabbed the phone and said: ‘You want me to handle her? She’s being ridiculous.’ I said sure, and figured she’d just tell my mom to drop it. What she actually said was: ‘You want to know who he is calling? Fine, I’ll tell you. He’s calling a guy. He’s dating a guy. Are you happy now???’ And that is how I ‘came out.’ My mom did not speak to me for about 6 months, and it took years after that for her to accept that I was gay, but that’s a different story.” 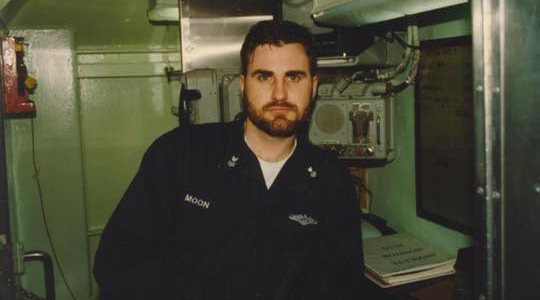 James Moon in his Navy years

What was it like being gay in the Navy?

“At first it was quite challenging. In the late 80s when I joined, Naval Investigative Service and the Defense Investigative Service were still conducting “witch hunts” whereby they would actively look for gays and lesbians, and once found, would threaten anyone accused of being gay or lesbian to turn over names of all their known gay and lesbian friends in the services. It was very scary. I had to hide who I was, and I could never reveal I was gay. I distinctly remember NIS agents going through the parking lots of gay bars in towns where there was a naval base, looking for Department of Defense decals on the cars. By the time I left the service in 1996, many people on my submarine knew I was gay and it was no big deal because I did my job and people relied upon me. I never raised the fact that I was gay to the command structure, but they knew. They simply decided not to discuss the matter. ‘Don’t ask don’t tell’ was just coming into full effect around the time I left the services, and while that was thought to be a better solution for gays, it was not always the case. My experience as a gay person in the navy was a constant exercise in changing pronouns and referring to any boyfriend as girlfriend, or more often avoiding the discussion of significant others altogether. However, once underway, sailors have a way of getting to know each other very well, and while some on my submarine did not particularly go out of their way to cause me problems, I knew they did not like me because I was gay. That said, most were either ambivalent or friendly to me even though they knew I was gay.”

Moon decided to join A Wider Bridge after meeting directors Arthur Slepian and Tyler Gregory at an AIPAC event, and realized that he fully supported the mission of A Wider Bridge and wanted to contribute to that mission. “The LGBT communities in Israel and America can learn from each other’s successes and even failures, but regardless, I can think of no better friend to walk alongside the American LGBT community than the Israeli LGBT community,” James says.

What do you think is the most challenging thing the LGBT community in Israel faces?

“I’m not sure I am qualified to say what are the most challenging things the LGBT community in Israel faces. However, from what I have read and understand, Israel appears to struggle with finding a balance between its secular and religious identities. Advocacy of LGBT civil rights seems to rankle some of the more religious minded Israelis – just as they do here. For example, I recently saw the remarks from Rabbi Shlomo Amar regarding LGBT being an ‘abomination’ and homosexuality a ‘cult.’ But it’s not like I have not seen the same sort of thing here, over and over in my lifetime. Israeli LGBT are still fighting to have their basic human dignity respected, but the same can be said of LGBT here in America. Perhaps we have had more successes, with respect to gay marriage and certain protections in the law, but those successes can sometimes feel quite tenuous. Because of this, we all must remain vigilant and ready to protect and advance our rights, for ourselves and for those who follow. Israeli LGBT, probably more so than any other LGBT community, must realize that LGBT are only one generation or one government away from persecution. That said, I think the LGBT community in Israel can and should take comfort knowing that LGBT like me in the United States consider them allies in a great struggle to advance humanity, and as comrades we can and do draw strength from each other. The LGBT community in Israel may feel small, but when viewed together, our combined communities are stronger and our combined strength stands as testimony that our civil rights are not open for debate.”

Board of Directors, Gay, James (Jim) Moon, US Navy