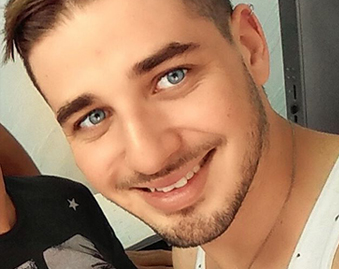 Roee Angel comes from an Orthodox Jewish family. In a Facebook post he describes the torture he went through coming out as gay, which included burial of two of his friends who committed suicide because of the nonacceptance of their families

I shouldn’t have to bury two of my friends.

At 13, I started to feel that something was wrong because I didn’t like what everyone else liked, I liked other things. At 14 I went to the rabbi and asked for help.”If you don’t take care this, your fate is Hell!” he said – So I decided to try to take care of myself and that was when I met Omer, who was exactly in my situation. He told me his rabbi advised him to go to “Atzat Nefesh” that offers treatments for our common problem and that he would soon begin treatment. But a few months later, Omer told me about electric shocks and the brainwashing he received. So at 14 I buried Omer. Omer had committed suicide. I buried a friend for the first time.

At 15, the depression soon came, because this is what it’s like when you’re living a lie. For a whole year every night I lay in bed in tears and begged God to take me up to the sky so I wouldn’t have to stay down here. And in the morning I got angry with Him for waking me up. So I lied to my parents, I lied to my friends and mostly I lied to myself.

At 16 my friend Maor had decided to tell his parents about his problem. His mother fainted and his father tore up his shirt and screamed, “I don’t have a son anymore,” so Maor found himself roaming the streets of South Tel Aviv in mid-winter. When he was 18, I buried Maor. Maor committed suicide. I buried my second friend.

At 17 I decided to stop the silence and to start exploring. I realized what became the most important thing: God is merciful. God does not forbid LGBT couples from existing. My God is the same as those specific rabbis’ God, and when they interpret it as a duty of death for these beings, they are the sinners who bring a dark interpretation of the “laws” and allow suicide and murder.

At 18, I decided to stop lying and I came out with my truth. I initiated a conversation with my parents and told them I’m gay, and I gained parents who welcomed me, who gave me a blessing that I now get to love and be loved back, because it does not matter if it’s a man or a woman – I deserve, as a basic human right, to love.

At 19, I received an outstanding soldier award at the Southern Command during Tzuk Eitan. I wonder what would Minister Uri Ariel think about it of after he had said “We lost because of recruiting homosexuals”.

This is not about a single case or the propaganda of the media – this is only about the lack of education on the subject in general and in particularly in my the community.

I’m not asking you to want your sons and daughters to be born gay, but I do ask you to do what the education system doesn’t do and it is to teach your kids about acceptance.