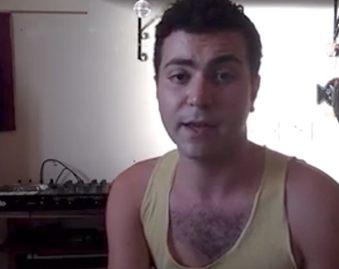 In an emotional video, Shay Sekler, the gay activist who was arrested at the Beer Sheva LGBT protest last week, walks us through that evening, and details the homophobia he suffered from the southern city’s police.

“We were about to go home from the protest in Beer Sheva after it was over,” Shay says in the video that went viral Facebook on Monday. “We waited for a taxi and suddenly a policeman stopped near my mother and said, ‘I could vomit on you and the sign you’re holding.’ We asked for his details. He refused to identify himself and he didn’t have any name tag, so I started to film him, thinking to upload it to the internet, and maybe this way someone would recognize this person.”

“In a matter of minutes this thing became an event; many policemen joined him, and a group of activists who saw it and heard it arrived as well, asking the policeman to identify himself.”

Sekler assumes that the policeman knew he made a mistake expressing the way he did, and his mistake might have consequences, and this is why he refused to identify himself. “He then arrested me for assaulting a police officer, while everyone who saw any of the videos that were published on social media, could clearly see that it was a false arrest,” Shay says.

“I was taken to the City Hall handcuffed, and there, where there were no cameras, the amount of LGBTphobic comment, on my look, my attire, my gender, my sexuality and my sexual practice, were countless. In addition, I was attacked by an officer of high rank, who tried to push my head into a wall with no reason.”

“I’m scared. The policemen on the way to the station took photos, each on their own personal phone, of my ID, with my full name and address. Can I tell you that I’m calm now, that I’m not scared of being attacked? I’m not.”

But according to Shy that wasn’t the worst thing that happened that night. “To me it’s usual and known,” he continues. “The police are not there to protect us. The police wasn’t there to protect another activist who was attacked only a couple of minutes after I was attacked, a few feet away from where we were, by a man who threw stones at him and hit him. The police weren’t there last year to protect us from a despicable murderer who announced what he was planning to do prior to his attack. And in most cases not only did the police not protect us, there were sometimes even the ones who attacked us, like in 2011, when 11 police officers attacked a transgender woman in Tel Aviv with electric shockers.”

But the most humiliating thing that occurred that night, according to Shy, is that the policemen kept telling each other to go wash their hands every time after they touched him, saying, “so you wont catch what she has,” and sometimes referring to him as “it,” or “this thing.”

“In a country that claims that it is a law-enforcing country, citizens are not being arrested for fulfilling their rights. And by the way, it is our right to film and document policemen in any situation. In a country that claims to be tolerant towards the LGBT community, that it has equality, that it is a progressive country – policemen don’t speak like that on the street. In a country that brags about being a haven for gay people, policemen don’t go and wash their hands after touching a gay man. We can’t let this thing go by quietly. We must learn how to protect ourselves from the LGBTphobia on the streets or from the establishment. I’m by no means asking people to carry weapons, I’m totally against it, but I think that we must find a way to protect ourselves. It doesn’t make sense any more.”