The monument, to be erected in Tel Aviv’s Meir Park, will have a symbolic pink triangle, the badge used by the Nazis to mark homosexuals.

Israel’s first monument to homosexuals persecuted by the Nazis will be erected in central Tel Aviv’s Meir Park (Gan Meir) later this year, near the headquarters of the Gay Center.

The monument, costing NIS 150,000, was the idea of attorney Eran Lev, a member of the municipal council from the Meretz party. He began working on the project after receiving support from Tel Aviv Mayor Ron Huldai. Landscape architect Professor Yael Moriah, who was responsible for the park’s renovation over the past years, was put in charge of the planning.

“This will be the first and only memorial site in Israel to mention the victims of the Nazis who were persecuted for anything other than being Jewish,” Lev told Haaretz. “As a cosmopolitan city and an international gay center, Tel Aviv will offer a memorial site that is universal in its essence. As far as I’m concerned, it’s not a monument, but a place — a place of quiet that will invite visitors to sit, contemplate, reflect and be in solitude.”

The erection of the monument is highly significant for Lev. “One of the first restrictions the Nazis imposed on the Jews was against going to public parks. We’re bringing that memory back into the public space. It’s very moving,” he says. “We felt it was important to present it as part of the park. It’s close to the Gay Center, but not inside it. It’s a public Israeli monument, erected by the municipality, and not something that belongs only to the gay community,” he said.

Memorials to the gay victims of Nazi persecution exist in Berlin, Amsterdam, Barcelona, Sydney and San Francisco. Most of them contain the triangle. The planners of the monument in Tel Aviv encountered many obstacles similar to the ones faced by the planners of the monument in Berlin in 2008. At the top of the list was the fact that, at least officially, the Nazis persecuted only gay men, and not lesbians, as homosexuals. But as Professor Moshe Zimmermann, a Hebrew University historian, pointed out, “The persecution of lesbians was often concealed using other pretexts. Lesbians were persecuted as ‘asocials,’ a group that included unemployed people and alcoholics.” 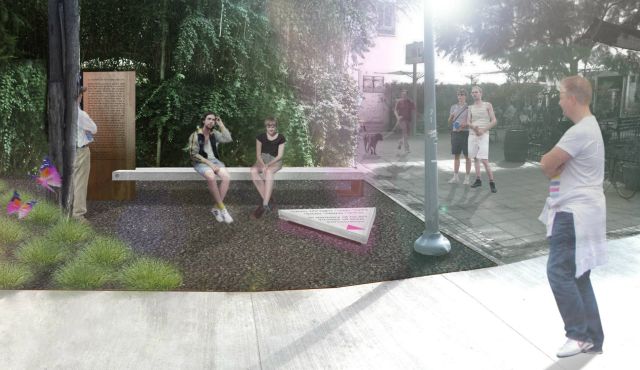