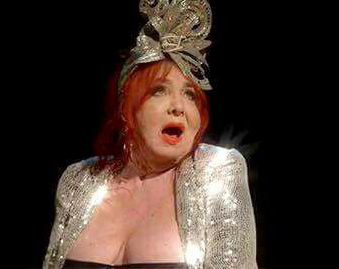 Gila Goldstein, an iconic pioneer activist and a veteran of the transgender community in Israel, died Sunday morning. Goldstein, 69, suffered a stroke and was rushed to the hospital about a week ago.

Gila Goldstein, who some consider the first out transgender in Israel, fought for her life in recent days in intensive care in a Tel Aviv hospital. Though she was under anesthesia and on a respirator, community members kept visiting her on a daily basis, in order to strengthen her and give her love even in her last moments. Goldstein died early Sunday morning, February 5.

Goldstein was born in Turin, Italy on December 18, 1947 with the name Avraham. She immigrated to Israel as a child and grew up in Haifa. At 13, she began to discover her gender identity and in the early 70s moved to Europe, where she worked as a dancer and stripper. When she returned to Israel she became a resident of “Bar 51” and “Roddick” night clubs in Tel Aviv.

Goldstein never hid the fact that she worked as a prostitute, and talked about it in many interviews and in the documentary film about her, “That’s Gila, That’s Me.” She began working as a prostitute in Haifa, at the memorial park and the Benjamin garden, and later on Hayarkon Street and Tel Baruch in Tel Aviv .

At the same time, Goldstein continued to perform on stage and has collaborated in various Fringe acts over the years. In 1998 she co-hosted a night radio show titled “Cinderella comes out of the closet” with Doron Aorsiano at 99FM radio station and she also appeared in the show “Nino’s Cabaret”, where she performed several songs she had recorded.

Over time, Goldstein became one of the great icons of the transgender community in Israel and of the LGBT community in general. In 2003, she was honored with a ‘Darling of the LGBT Community” award, “for being a prominent representative of a generation that did not hesitate to live under its gender identity with absolute visibility, despite the rejection, persecution and the many tribulations it faced.”

In recent years, she was known for sitting in neighborhood cafes in Tel Aviv, “Georgia”, “Ulla-la” and “the streets”, on a daily basis, and became an icon for many LGBT people in Tel Aviv who wanted to meet her up close, and talk to her. Goldstein was always happy to chat and advise any community member who approached her.

Since 2011, a nationwide Gila project for transgender empowerment – named after her- has operated in Israel. The project takes care of legal advice on different backgrounds and gender, operates a network of housing solutions and provides job search assistance and support in the face of state institutions.