In an interview published today in Yedioth Ahronot, Israel’s Channel 10 News economic commentator comes out of the closet. 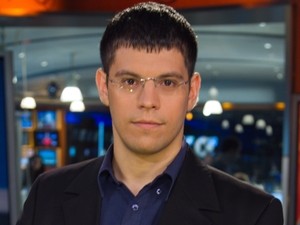 Matan Hodorov, 30, was named by Forbes Israel in 2008 as one of the most influential people under 40. Four years later he was on the list of the 40 most influential people in the Israeli economy by the Israeli magazine Globes. Last year he received an Ot Ometz Award for his work for civil rights and corrections of social injustices. Today he speaks for the first time about his personal life.

“I realized I was gay at the age of 14,” Matan says in the interview. “I never considered the matter as a dark secret that I treasured to myself, but I felt uncomfortable to talk about things in public. This is a fundamental component in my personality. When people don’t know it, you find yourself in unpleasant situations again and again. ”

“I work with adults, economic leaders, CEOs. They offer to match their daughters, and I had to avoid this with discomfort. You are also asked by circles even closer to you – what about a girlfriend? And you don’t want to hide, but on the other hand you don’t want to reveal too much. There is a certain barrier, and over time this barrier makes the weight heavier, it sits down on you and starts to bother you.”

“It’s not even a matter of ‘coming out,’” Matan says. It’s a term that I don’t like. There is a matter of living your life in the most ordinary way possible, with no stopping. I want the next decade in my personal life to look different. I see a lot of examples [in the gay community] of stable couples, children that are born to such couples, and this is what I would like to happen to me. “