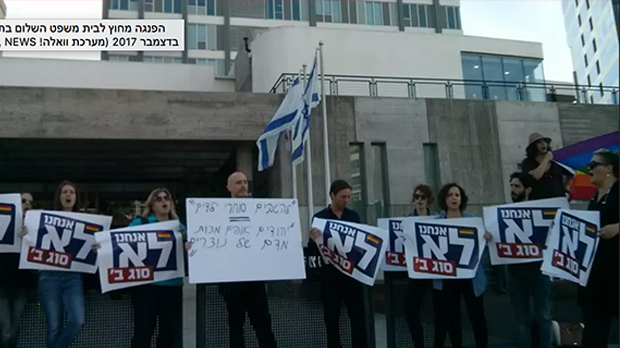 LGBTQ activists demonstrated Monday in front of the Tel Aviv District Court, where a hearing was held on the appeal of the Ministry of Social Affairs against a parenting order given to a same-sex couple, claiming that their three-year-old son, who was born through sperm donation, was actually a “child reservation” for the goal of trafficking in children. 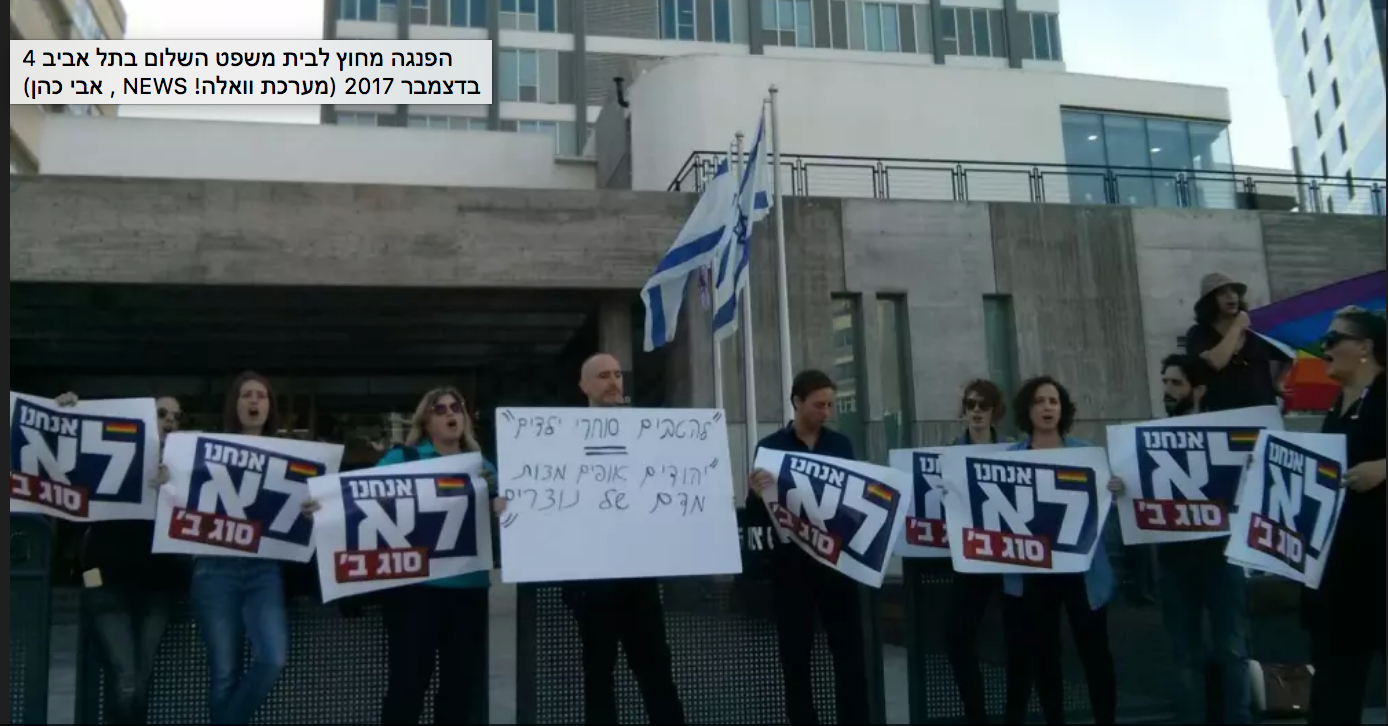 “This is the second time in a few months that the position of the Ministry of Welfare, as expressed in legal proceedings, reflects a dark, shameful and offensive worldview towards the LGBT community,” said Chen Arieli, chairman of the Aguda. “Our parenting capabilities are not what should stand here for a test, but the leadership skills of the government that defines us as second-class citizens. There is a very disturbing trend of systemic regression here. The state goes backwards and presents narrow positions that should be of great concern to anyone who believes in freedom and equality. Last time 20,000 people went out to the streets and we’ll even go up to 100,000 people- we will not restrain our rights to be a trade currency in the hallways [of the government].”

Last week, the position of the Interior Ministry to the court was exposed on Walla! NEWS. In the case of Hadas and Mor Arkadir Ayalon, the lesbian couple had submitted a request to the family court in Tel Aviv a year and a half after the birth in order to recognize them as mothers of the child, and this was approved. However, the Ministry of Welfare appealed the application of the order retroactively, claiming that in order for a parenting order to be recognized from the date of birth, an application must be submitted up to 90 days from that date. The Ministry claimed that this case is therefore about child trafficking.

In the state’s appeal, which was first filed in January of this year but will be discussed only next month with the Attorney General’s Office, it was stated that “in the absence of a genetic connection between a parent and his child, there is a fear that a child will become a ‘marketable product,’ while diminishing the value of human life and the value of a child’s life. A person who has a penny in his hand will be able to ‘order’ a child as he sees fit, and apparently the highest bidder ‘is better.’ The fear is therefore of trafficking in embryos and children.”

The court ruled Monday that the parenting order given to the couple should apply from the date of the birth, even when the parenting order was submitted a year and a half after the birth. The judges appealed to the Welfare Ministry to withdraw from its appeal filed in January, and ordered the state to give its reply within 12 days.

Attorney Ira Hadar, who represents the couple, said: “It is a shame that the state continues to abuse the LGBT community and continues to raise insulting accusations against our families, such as the disgraceful claim of child trafficking. I’m happy that the court is pressuring the state to change its opinion on this shameful and unnecessary appeal, and hope that this will bring an end to the campaign of delegitimization against our families. “