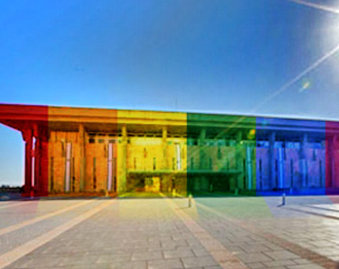 Today is LGBT Rights Day at the Israeli Knesset and it’s very much needed: Three bills concerning the status of the LGBT community in Israel were voted down by the Ministerial Committee on Legislation this week

Three bills concerning the status of the LGBT community in Israel were voted down by the Ministerial Committee on Legislation and the vote on two others was postponed on Sunday, a day before the Knesset marks LGBT Rights Day.

Two other laws, one banning conversion therapy for minors, and one on civil unions were postponed for a week.

“The Haredi parties are blocking the advancement of bills on issues of the [LGBT] community, and sometimes Habayit Hayehudi and Yisrael Beiteinu join them,” said a source in Likud, adding, “This is a homophobic coalition.” The chances that any of these initiatives from opposition parties will be passed by the ministerial committee is small, he added.

“The fear of the Haredi parties and narrow coalition considerations leave the members of the [LGBT] community discriminated against in the law books,” said Rozin. “Last year, the prime minister said in the Knesset plenum that every person was created in the image [of God]. This year, he must add content to this statement and act in favor of full equality for the gay community.”