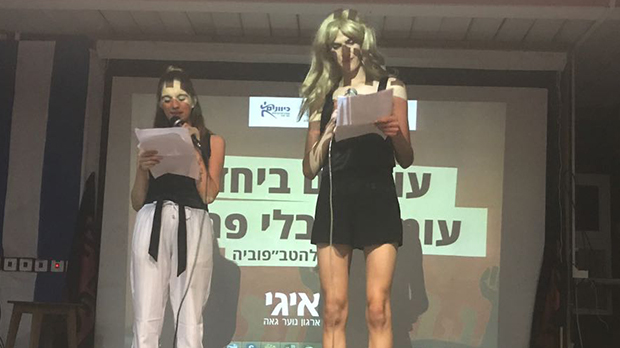 IDAHO, or in its new name IDAHOT (International Day Against Homophobia and Transphobia) was marked Tuesday evening in Israel by IGY, gay youth organization, in three different locations.

This year, for the first time, the events for the International Day Against Homophobia and Transphobia were held in three different locations around Israel: Haifa, Be’er Sheva and Tel Aviv. Hundreds of young people from youth movements and organizations came to these events in order to talk about the different and the similar, and to fight together for solidarity.

In recent years, IGY, Israeli Gay Youth organization, has taken upon itself the responsibility to mark this day in Israel and to gather around other youth movements to convey a message of love.

“We will work together, day and hour, to change the world and the society around us for the better, to be more tolerant, more inclusive. ”

The events in the various locations opened with an exhibition by the students of IGY, of works that spoke about acceptance of the different and called for an end to the violence against LGBTQ people in particular and violence against other humans in general. “Unfortunately, even twenty-seven years later, the struggle against LGBTphobia is far from over,” the hosts said at the opening ceremonies of the events:” We have many more fronts to fight on – in law, education, institutions, streets and even in our homes.”

The event in Tel Aviv was co-hosted by Miss Trans Israel and “Big Brother” alumna, Talleen Abu Hana. “Hatred leads to death, love leads to life,” she said in her speech, and won enthusiastic applause.

The various speakers added that the reality of LGBT people in general, and of LGBTQ youth in particular in Israel in 2017, is still not simple. “This is a reality in which they are not fully equal before the law or society, almost anywhere in the world. A reality in which young people in and out of the closet hear the words “gay” and “transvestite” thrown at them at school like a curse. We are exposed to violence, harassment and bullying on a regular basis.”

However, the speakers added that there are also good things that happen within this reality and noted progress and change for the better. “This process is driven by the hard work and struggle of millions of people who have paid heavy prices, and this process will not continue to happen on its own – we must continue to shout, speak and act to push it forward, step by step.”