UPDATE: As of September 15, 2019, Noam party has dropped out of the race. However, we are disturbed that ths party intends to spread its homophobic and anti-Reform movement message outside of the Knesset.

A Wider Bridge is deeply concerned about the increasing right-wing extremism, homophobia, and anti-Reform Movement sentiment that has been surfacing from the far-right. The Anti-LGBTQ Noam party has been comparing gay rights advocates to Nazis and Palestinian suicide bombers and has placed homophobic and anti-Reform movement billboards around Israel. While most experts doubt the viability of Noam in meeting the threshold number of votes to enter the Knesset (especially Noam), we are concerned that their rhetoric alone is already inspiring hate — which as we well know from incidents both in the US and in Israel, can inspire violence.  Already the government has ruled that their homophobic billboards are legally allowed as part of campaigning, boldly legitimizing anti-LGBTQ messaging across Israel. 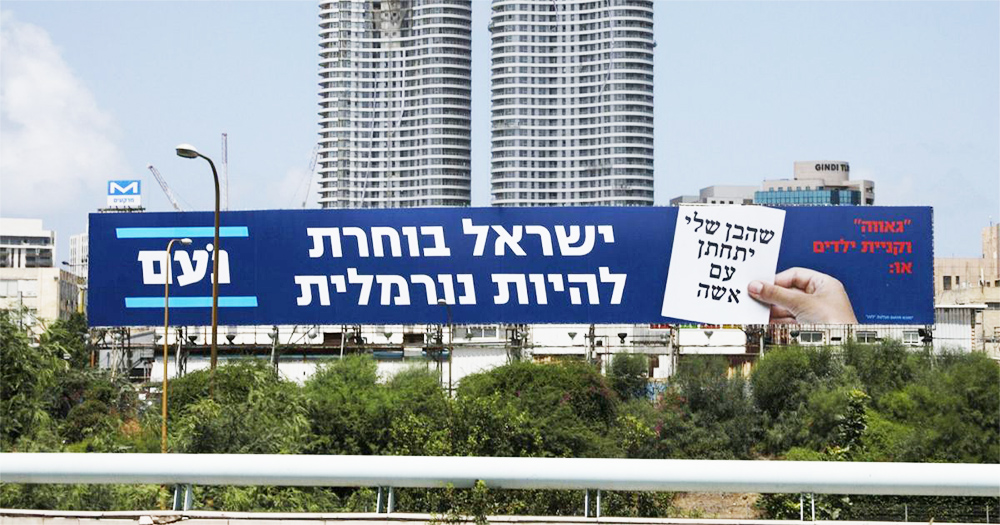 Homophobic billboard: “[Gay] Pride and the buying of children, or having my son marry a woman – Israel chooses to be normal.”

While we don’t want to give added airtime to the hatred of a few – we do feel that it’s important to express our concern that this hatred will spread into the mainstream dialogue. And more viable parties are lifting up problematic leadership, like the Yamina (New Right) party, led by Ayelet Shaked, which includes ‘proud homophobe’ Bezalel Smotrich in one of its top spots.

We are also concerned about a ruling majority that derails the passage of LGBTQ-rights bills, including the anti-gay Surrogacy bill which Netanyahu himself said he would like to revisit and repeal. This rise in Xenophobic and anti-secular rhetoric only serves to further divide Israelis – Jewish and non-Jewish, and religious and secular, left and right.

Of equal concern is the proposed law limiting the powers of the Israeli Supreme Court. Ayelet Shaked (New Right Party) has been championing this law, which if passed, would be a serious threat to the democratic future of Israel. For the past 30 years, Israel’s Supreme Court has championed LGBTQ rights and is responsible for virtually all of the advancements under the law.