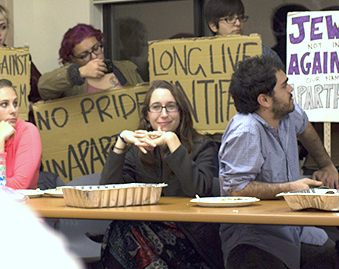 On January 27, A Wider Bridge’s Director of Programs and Development Tyler Gregory went to the campus of UC Santa Cruz to give a talk about LGBT life in Israel, as part of our A Wider Bridge on Campus program. A group of anti-Israel protestors, both students and faculty, unsuccessfully attempted to use intimidation to cancel the event, and later threatened to disrupt the program to drown out our voice. Ultimately, their efforts failed, but this is a story worth sharing. 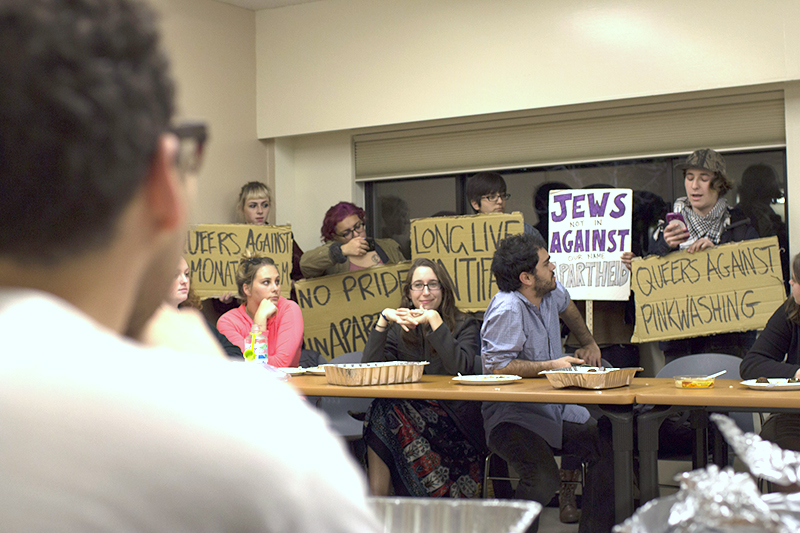 I was invited to UC Santa Cruz by the staff of Hillel and the program was to be held at the Lionel Cantu LGBT Center on campus. My objective was to engage LGBT students with Israel through the experiences of Israeli LGBT people – their challenges and victories, their fight for equality, and their desire to live and to love. A Wider Bridge has spent the past five years building a deep network of relationships with Israel’s LGBT community – a community whose stories deserve to be heard.

The day of the program, Israel’s detractors at Santa Cruz began contacting the LGBT Center to demand that the program be canceled and then to threaten that they would block students’ entry to the event. The environment in and around the LGBT Center, intended to be a safe place for students, became so hostile and threatening that the program was relocated. With the leadership of Cantu Center Director Deb Abbott, Hillel Director Jim Atkins, and UC Santa Cruz Provost Elizabeth Abrams, the program moved forward successfully at the campus’ Merrill College.

What is it about what I had to say that so angered or threatened the protestors that, rather than simply not attend, they seemed determined to deny interested students the opportunity to learn, engage, and come to their own conclusions? Our nuanced message about Israel and its LGBT community — thriving, yet still yearning for equality, doesn’t fit well into their black and white world, in which Israel is nothing more than a pariah state. The students who came to the program that evening learned that the Israel Defense Forces (IDF) have allowed gays and lesbians to serve openly since 1993, the same year Bill Clinton signed “Don’t Ask Don’t Tell” into law. They discovered that LGBT Israelis have been protected from workplace discrimination since 1992, while the US Congress in 2015 has still failed to pass ENDA. At the same time, I didn’t shy from sharing that same sex marriages are not yet legally performed anywhere in Israel, and that beyond the gay “mecca” of Tel Aviv, homophobia is still widespread. Why? Because these realities aren’t about promoting or rejecting Israeli governmental policies – they’re about relating shared experiences to build understanding and connection.

We seek to move past the divisiveness of the conflict by engaging students with the people of Israel and their stories. Reducing Israel to a political conflict dehumanizes the lives of Israelis and Palestinians alike. A Wider Bridge encourages personal engagement as an effective form of advocacy on campus and beyond.

Here in the Bay Area, we are proud of efforts such as the JCRC’s “Year of Civil Discourse,” that encourage meaningful dialogue about Israel. Contrast that with the inciting statement issued by those who protested my program, which included this:

“We are not interested in a dialogue with organizations such as A Wider Bridge… Long live the Intifada!”

We believe effective dialogue includes building personal connections between the people of Israel and North America, and we firmly oppose those, including the UC Santa Cruz’ Students for Justice in Palestine, who seek to intimidate students with simplified political statements on cardboard signs. 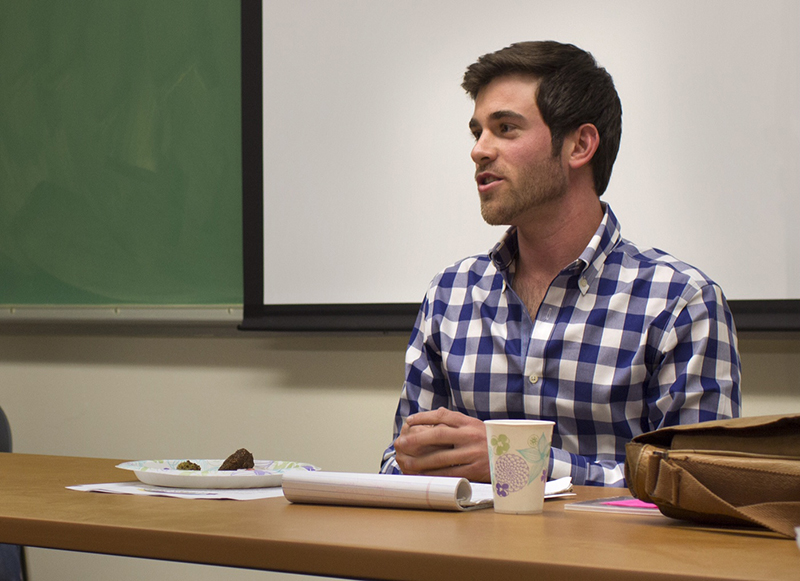 This Article was also published on J Weekly