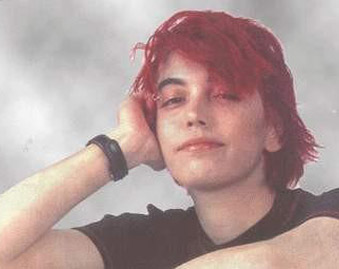 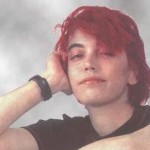 Inbal Perlmuter was an Israeli composer, musician, singer and lyricist, and a founding member of the all-girl rock band Ha-Mechashefot (“The Witches”).
This iconic and controversial figure was a pioneer in the LGBT community, who didn’t compromise about who she was, and served as a living example for girls to come out of the closet, until her sudden death in a car crash at the age of 26, on the eve of Rosh Hashana 1997.

Perlmuter’s music was influential to the Israeli music of the 1990s. She began her musical career in 1992 when she founded, along with Ifat Netz and Yael Cohen, the band ‘Ha-Mechashefot.’ She continued producing solo works and numerous collaborations, both in Israel and abroad. The rock band began to perform in clubs around Israel, and got public notice on a TV show called “Songs of the Sea of Galilee”, hosted by Naomi Shemer. Ha-Mechashefot performed a sensual version of Shemer’s classic song ‘Kesem ‘Al Yam Kinneret’ (“Magic on the Sea of Galilee”) which astounded both the audience and the host. This version was recorded in April 1993, and was released as a single with cover art by Perlmuter. Shemer was delighted, exclaiming: “Shall a Negro turn his skin inside out? He certainly shall!” (This being a Hebrew expression meaning that someone or something has drastically changed).

In early 1994, the band released its first album, “Ad Ha-Oneg Ha-Ba” (‘Till the Next Pleasure’). Perlmuter wrote the lyrics and composed nearly all the songs, which where all in Hebrew except one (‘Dingo’). Thanks to Korin Allal’s arrangement and production, the band succeeded in creating an energetic guitar rock album which gained immense popularity and was certified gold. The title track became one of the most successful songs in Israel that year.

In March/April 1995, Ha-Mechashefot released its second album, “Zmanim Muzarim” (Strange Times). This time they arranged and produced the entire album themselves. The band continued holding concerts frequently and was often a warm-up act for Björk.

In April 1996, the band released its third album, “Ha-Mechashefot Mitkasot” (‘The Witches Cover Up’), a collection of all the cover songs they recorded in their early days. The only popular cover not on this album was “Sweet Dreams”; Annie Lennox of the Eurythmics had refused to allow the band’s version of her song to be released. In protest, Perlmuter distributed the song on an underground tape; on the cover, which she had designed, were the words “Shit Rights”. “Haklatot ahronot” (‘Last Recordings’), an album of Perlmuter’s preliminary recordings, was released about a year after her death.