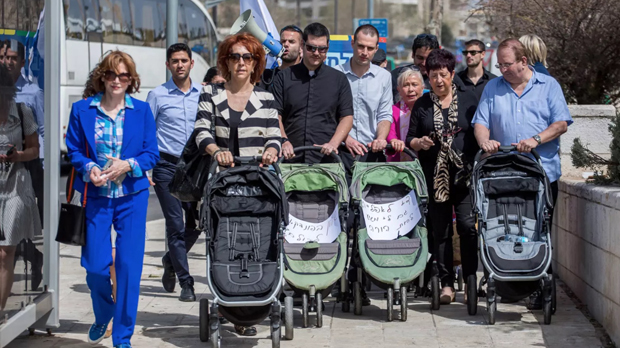 Until now, state-supported surrogacy in Israel has only been available for married heterosexual couples; the new law will expand the eligibility to single women as well, but not to same sex couples.

Single women will soon be entitled to state support for having children through a surrogate mother, but gay couples will not, under the terms of legislation soon to be passed into law.

The surrogacy bill was approved in the Knesset’s Labor, Welfare and Health Committee on Monday for its second and third readings by an 8-4 vote, in a hearing that became noticeably emotional during comments made by two gay MKs, Amir Ohana of Likud and committee member Itzik Shmuli of the Zionist Union.

Until now, state-supported surrogacy has only been available for married heterosexual couples; the new law will expand the eligibility to single women as well.

A proposed amendment to the legislation by Amir Ohana to make gay couples eligible for surrogacy was defeated.

The Likud MK told the committee about his experience in establishing a family through surrogacy, having to go abroad to do so and the difficulties this created.

“When I and my partner wanted to establish a family, we were forced to go to a country thousands of miles away. The twins were born before full term and we could not be there. We turned the world upside down in order to find a Jew who didn’t even know me, who lived close by, to be there so someone would be there by their side,” related Ohana.

“I am not inciting against the rabbinate or against the religious – I’m just asking for a little humanity,” he said.

Speaking on Kan’s Reshet Bet radio program Monday morning, Yogev declared that “a natural family is a mother and a father and children – this is the history of humanity,” insisting that a child needs both a mother and father.

The law will now go back to the Knesset for its final readings and likely be passed into law.