Maysaloun Hamoud’s debut feature film In Between is an empowering tale of three Palestinian women living in Tel Aviv, each fighting their own battles for independence and fulfillment. Balancing tragicomic relationship blues with sharp sociopolitical observation, Hamoud’s slyly subversive drama draws us deep into an often hidden world. 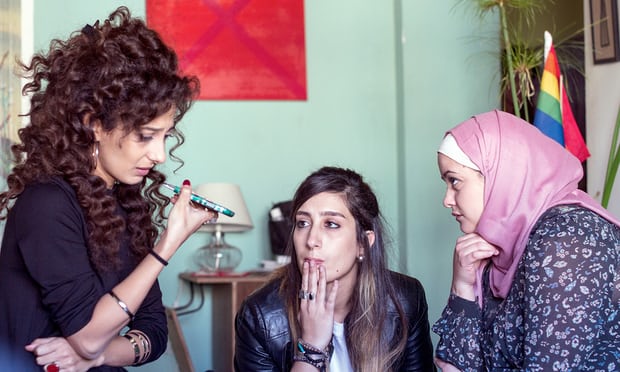 As the title suggests, these women occupy a liminal space, caught between freedom and repression, religion and secularism, the past and the future.

Laila (Mouna Hawa) is a chain-smoking, leather-jacketed lawyer who can drink and snort the boys under the table and takes pride in overturning the conventions of her profession and her gender. She lives with Salma (Sana Jammalieh), an aspiring DJ who works long hours in kitchens and bars and whose strict Christian parents don’t know she’s gay. When strait-laced and studious Nour (Shaden Kanboura) arrives from Umm al-Fahm in northern Israel, the ultra-conservative Muslim lifestyle she leads is out of step with that of her new flatmates. No wonder Nour’s sanctimonious fiance, Wissam (Henry Andrawes), worries about their influence, eager to bring the marriage forward and remove his bride from such corrupting company.

Director Hamoud has paid a price for making this film. After being criticised for taking Israeli state funding, she found herself the subject of death threats and fatwas from fundamentalists, accused of disparaging or corrupting Muslim women, particularly in areas such as Umm al-Fahm. Elsewhere, In Between has been rapturously received, with Hamoud receiving the Women Motion Young Talents award at the Cannes festival. Isabelle Huppert, who selected her for the award, declared that “the free spirited and joyful women [Hamoud] portrays… are true heroines of our time”. The film has also won awards at the 2016 Toronto International Film Festival, the 2016 San Sebastian Film Festival and the 2016 Haifa Film Festival.

Read the complete story in The Guardian.

New Yorkers – you can see In Between at the Other Israel Film Festival on opening night 11/2 and again the next day on 11/3.  Use the code AWB at checkout for a 25% discount.