A joint project of Bat Kol, Havruta, and Shoval – Israel’s Orthodox LGBTQ Organizations –  aims to continue pushing for LGBT acceptance in the orthodox communities in 2017 through visibility in the media. The organizations’ work for constant push for LGBT visibility in the religious world has dramatically reduced ignorance amongst the orthodox. CROWDFUNDING GOAL: $5,000

About the Project | About the Organizations | The Result: “Our Faces, Together!” 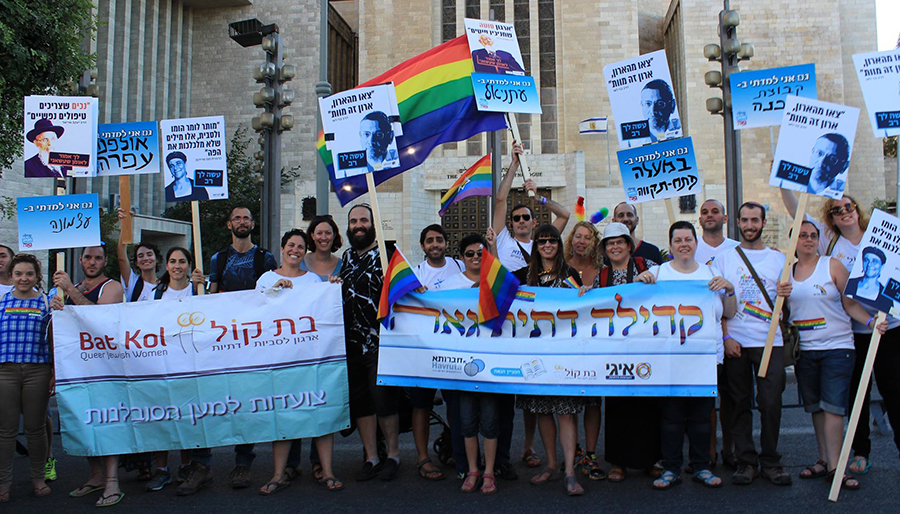 “Perverts.” “Abominations.” “Sick people.” These are only some of the ways orthodox Jewish rabbis have described the gay community. But while bias against, and rejection of, LGBT people within the religious Jewish community goes back centuries, amazing changes in the attitudes of religious people and their leaders are bringing great optimism to the many religious LGBT people who reject the notion that they must give up their Jewish observance and community ties because of their orientation.

As with the secular world, these wonderful advances have come mostly from the increased visibility of religious LGBT people, both in synagogues and in the media. The special message, ‘We are here. We are queer. We are part of YOU,’ is bearing fruit.

Zehorit Sorek explained on Israeli News show Erev Hadash: “[When we] hide in the closet, we are ‘elsewhere,’ we are the ‘other,’ beyond a wall. And, of course, ‘out of sight’ can so easily mean ‘out of mind.’ In hiding, we do not challenge a community to know and find a home for those who live amongst them. Worse, this ignorance can lead to misconception, hatred, and worse.”

Havruta, the organization for gay religious men, and Bat Kol, the organization for lesbian religious women, collaborated last year in the now famous “Our Faces” project in which 44 members of the religious LGBT community revealed their identities in photos and told their stories. The campaign was published in paid ads in all the religious newspapers and websites in Israel. The orthodox community was electrified. Zehorit explains that the constant push for LGBT visibility in the religious world has dramatically reduced ignorance amongst the orthodox. This increased understanding of who lives amongst them and what their orientation is really all about is changing the communities for the better – not just for their LGBT members but for the overall fabric of the society.

“When we tell our stories and expose our names and faces, everything becomes personal,” Zehorit says. “We are no longer ‘beyond the wall,’ we are the neighbors’ daughter and the babysitter of children in the neighborhood, and we’ve learned in the same classes. We are the people they’ve known since childhood. No matter what prejudices may exist, how can our orientation suddenly change what they’ve always know of who we are? Knowing us is the key.”

Bat Kol and Havruta would like to continue pushing for acceptance in 2017, building on the amazing results from last year’s ad campaign. “After the campaign there were families who suddenly started speaking with their [gay] children,” Zehorit says, “but the most amazing thing that happened is that rabbis started to discuss the project and mention it in meetings and lectures.”

A Wider Bridge Impact would like to help these religious organizations raise the funds to continue the media visibility this year. We aim to raise $5,000 to help Bat Kol and Havruta fund similar ad campaigns.

One undeniable characteristic of the religious Jewish world is its commitment to learning. Let us help this community of our People learn about the LGBT who live and contribute amongst them.

Havruta is the largest organization for orthodox Jewish gay men in Israel. It provides a safe haven and actively works to inform and educate the religious public about LGBT issues in their communities. Read more about the work of Havruta

Bat Kol – the Religious Lesbian Organization – is a growing community building new pathways for fulfilling and celebrating both religious and lesbian identities, making it possible for women to live in loving relationships and raise children within the context of traditional Judaism and the larger religious community. Read more about Bat Kol