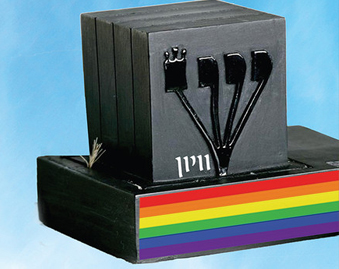 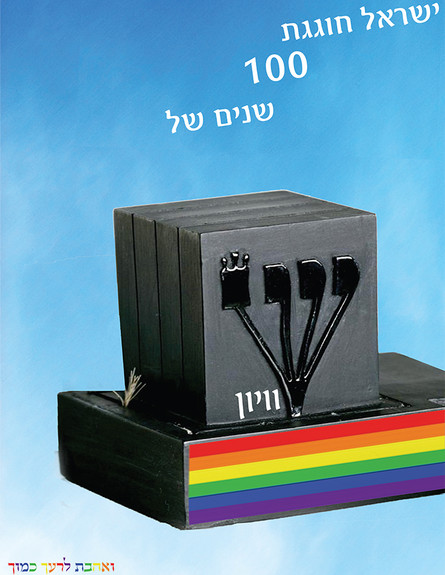 Einav Elmakias, 24, from Ashkelon, and Aviv Bachar, 24, from Tel Aviv, are two students of Visual Communication who decided that their vision for Israel at 100 is particularly “proud”. They have chosen to design posters that highlight the country’s LGBTQ face, thinking / hoping that by then Israel will have  complete equal rights. “When I started thinking about ideas for the poster, I noticed a lot of things we would like to fix in our country,” says Einav. “I decided to focus on what I find most important – acceptance of the other, the concept of refering to a person only as a person, regardless of personal life choices. On the poster itself I chose to combine the Tefillin and the rainbow flag, putting together the two icons of these two different worlds to create this unity I so wish for our people. ”

“I want to change the whole attitude and all the benefits in our favor, the LGBT community,” says Aviv, ” and perhaps the perspective of people around, especially the government. Through my poster I predict that come the 100th Independence Day of Israel we will have equality for same-sex couples, because  the bottom line is, we are all human, we all work, we all pay taxes and there shouldn’t be a difference between straight people and LGBT people . ”

Do you believe that in 34 years your posters will become a reality? 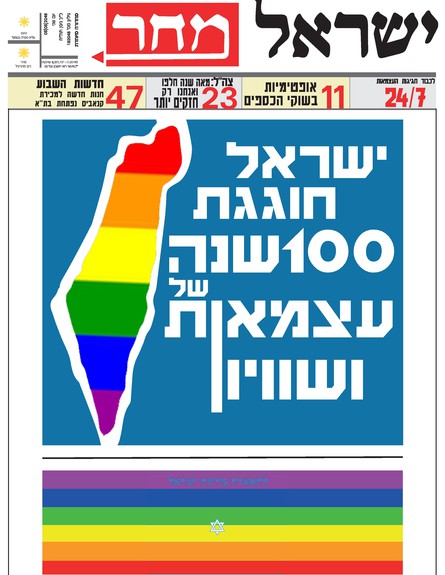 Aviv : “Yes, as long as it depends on me and I can have my voice heard – I’ll do whatever it takes to make a difference. Already I see here and there, things change for the better, the legalization of various parts of the agenda. After all, we live in a modern world and a person like me who wants his opinion to be heard, can voice it any way he chooses. ”

What responses did you get from your surroundings? Your teachers ? the community ?

Einav : “I received responses that are more enthusiastic and less enthusiastic. What has been understood is the message I was trying to convey, for example, when people changed their photos on their Facebook page into the equal signs in blue and white, and the awareness of gay marriage has increased. Then some reactions were excited because they thought I helped to promote the issue, and some were less, because I used a symbol that is considered sacred and they thought it was inappropriate. ”

Aviv : ” I came out about 8 months ago and I was dealing with the subject in of all my school projects. I think I must have brought a little change because I made very emotional projects and got very good reviews. Regarding  this specific poster, my classmates feel that my work is very moving.”