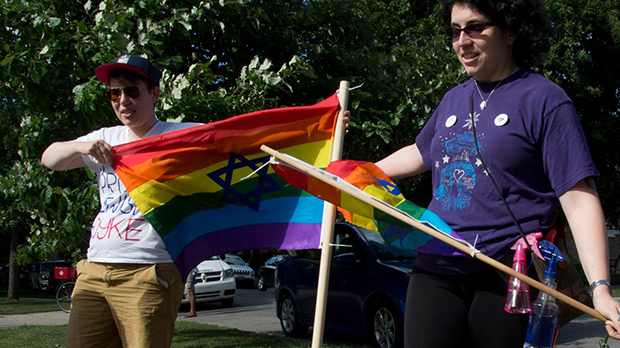 “China may brutalize Buddhists in Tibet and Muslims in Xinjiang, while denying basic rights to the rest of its 1.3 billion citizens, but “woke” activists pushing intersectionality keep mum on all that” — The New York Times staff editor Bari Weiss pens a sharp criticism on banning the rainbow-Jewish flag at Chicago Dyke March

This weekend, at a lesbian march in Chicago, three women carrying Jewish pride flags — rainbow flags embossed with a Star of David — were kicked out of the celebration on the grounds that their flags were a “trigger.” An organizer of the Dyke March told the Windy City Times that the fabric “made people feel unsafe” and that she and the other members of the Dyke March collective didn’t want anything “that can inadvertently or advertently express Zionism” at the event.

Laurel Grauer, one of the women who was ejected, said she’d been carrying that Jewish pride flag in the march, held on the Saturday before the city’s official Pride Parade, for more than a decade. It “celebrates my queer, Jewish identity,” she explained. This year, however, she lost track of the number of people who harassed her for carrying it.

I’m sorry for the women, like Ms. Grauer, who found themselves under genuine threat for carrying a colorful cloth falsely accused of being pernicious.

But I am also grateful.

Has there ever been a crisper expression of the consequences of “intersectionality” than a ban on Jewish lesbians from a Dyke March?

Intersectionality is the big idea of today’s progressive left. In theory, it’s the benign notion that every form of social oppression is linked to every other social oppression. This observation — coined in 1989 by Kimberlé Williams Crenshaw — sounds like just another way of rephrasing a slogan from a poster I had in college: My liberation is bound up with yours. That is, the fight for women’s rights is tied up with the fight for gay rights and civil rights and so forth. Who would dissent from the seductive notion of a global sisterhood?

Well, in practice, intersectionality functions as kind of caste system, in which people are judged according to how much their particular caste has suffered throughout history. Victimhood, in the intersectional way of seeing the world, is akin to sainthood; power and privilege are profane.

By that hierarchy, you might imagine that the Jewish people — enduring yet another wave of anti-Semitism here and abroad — should be registered as victims. Not quite.

Why? Largely because of Israel, the Jewish state, which today’s progressives see only as a vehicle for oppression of the Palestinians — no matter that Israel has repeatedly sought to meet Palestinian claims with peaceful compromise, and no matter that progressives hold no other country to the same standard. China may brutalize Buddhists in Tibet and Muslims in Xinjiang, while denying basic rights to the rest of its 1.3 billion citizens, but “woke” activists pushing intersectionality keep mum on all that. Continue reading in the New York Times