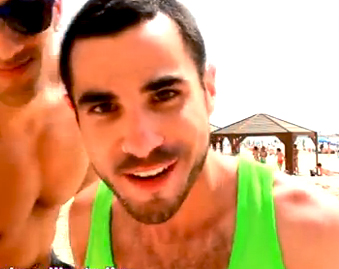 Israeli YouTube sensation, Idan Matalon, offers Hebro and A Wider Bridge a welcome trailer for the Israel & Tel Aviv Pride trip that’s coming up in June.  The video was shot on the Hilton Tel Aviv gay beach. Watch and share!

YouTube sensation Idan Matalon has re-edited his Tel Aviv Love Fest video, in order to create a special promo clip for Hebro’s upcoming  Israel and Tel Aviv pride trip. The original “Love Fest” remix video, which was shot on Tel Aviv’s famous Hilton beach, was released last year just before gay pride, and reached over 20,000 views on YouTube. The connection between the video’s sexy vibe and Hebro was inevitable.

“I met Jayson Littman of Hebro last year during his LGBTQ Israel Experience visit with Taglit Birthright,” says Idan. “They approached me then to create a fun video for them and we did a version of the song ‘Call Me Maybe’ on the beach, which was real fun. A couple of weeks ago Jayson asked me to do something for the Hebro trip and I immediately connected the vibe of Hebro to the Love Fest remix video.”

“Love Fest” was Matalon’s first ever video where he also sings, as opposed to lipsyncing famous songs. The song was released in December 2012, and back then he told us that he had been running with the idea for a few months prior to the actual execution. “The thought of an original song came to me about six months ago, after I started feeling kinda fed up with lipsyncing and realized it’s time to fully prove to the world what I’m capable of,” Idan told us. “It was pretty obvious to me that the song would be about Tel Aviv, because I received all of my inspiration for my previous videos from the city- the vibe, the colors, the different and interesting people, and mostly the feeling that you can do anything here without people judging you.

I wanted to show the real and happy Israel to the world, because I think that people know only what they see on the news- that Israel is dark and depressed and has wars. It’s not really like this in everyday life.”