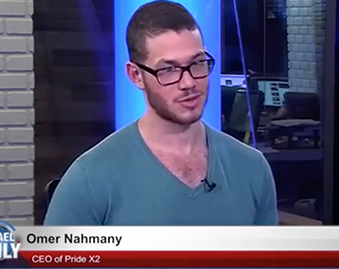 Omer Nahmany was interviewed Monday by ILTV.tv about his new project “Pride x2 to Israel” and the Pride Blue and White movement.

In the face of growing attempts by anti-liberal forces to stop integration of women, members of the LGBT community, and minorities into the military, Pride Blue and White believes in strengthening the social values for the IDF and those serving the state of Israel.

The new project, Pride x2 To Israel, attempts to double the number of out of the closet LGBT soldiers and the number of women in combat positions in the IDF.

“I was out of the closet throughout my entire service,” Omer says. “Throughout my service about thirty soldiers came out of the closet to me. More than that, I had religious soldiers who came up to me and said, ‘I didn’t believe that this is how a gay person looks’ because all of their lives they’ve heard from rabbis that gay people are perverts.”

Watch the full interview with Omer below.