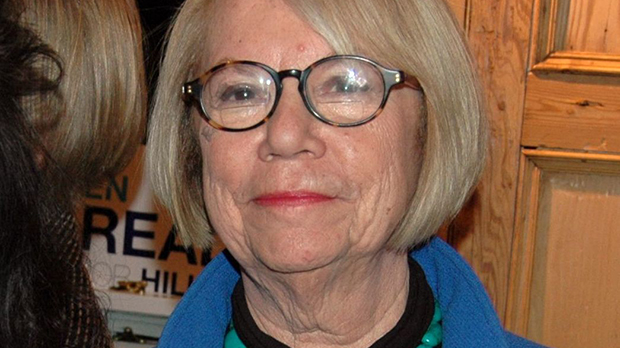 Former President Clinton’s communications director and current president of the JAC Education Fund, Ann F. Lewis, was part of the Women’s March in Washington in January, but she didn’t march to show support for hateful, divisive language that tries to expel Zionists and denies the existence of Israel.

On Jan. 21, I was part of the Women’s March in Washington. I was thrilled to share this historic day with members of my family. We cheered for policies like equal pay for women’s work, for pro-family legislation like family leave, for education and health care — including reproductive health care — available to every woman and girl. We cheered for the right to live and love in dignity and for equality for every person.

I marched to show my disappointment with the results of the presidential campaign in which a candidate was elected who had a history of leering sexism, groping hands, barely coded racism and regressive policies that scapegoat vulnerable groups for political gain.

And I marched to show my faith in America: understanding that I may sometimes disagree with election results but have confidence in democracy, knowing that is up to us to organize, mobilize — and win the next time.

I was proud to be among the marchers on that historic day. But I am not proud of what I’m seeing now: attempts to highjack the Women’s March in support of a very different kind of politics.

So let me clear, and I know I speak for many more: I marched because I believe, as Hillary Clinton told the United Nations Conference on Women in 1995, that women’s rights are human rights. I believe that America is stronger with allies who share our democratic values, including women’s rights.

I did not march to show support for hateful, divisive language that tries to expel Zionists like myself and my friends from the women’s movement by defining feminism as available only to those who deny Israel the right to exist.

With so many countries in the world that still deny women even basic rights, why would leaders of the Women’s March aim their attacks only on Israel — a country in which women’s rights are written into law, and the only homeland for the Jewish people ?

I did not march to show support for Rasmeah Odeh, who was convicted in an American court of lying about her previous conviction for terrorism, and yet was embraced by some Women’s March leaders until she finally had to accept deportation.

I do not support Assata Shakur, once known as Joanne Chesimard, convicted of the murder of a New Jersey state trooper and now living in Cuba, who was cheered by the Women’s March Twitter feed. And I certainly did not march to endorse an attack on the CNN newsman who challenged the salute to Shakur, and was immediately condemned as “alt-right.”

I did not march because I agree with the expulsion of women holding Star of David flags from a march for LGBT rights, on the astounding claim that this historic symbol of the Jewish people is threatening to some people.

I was angry when I learned of this story, and even angrier when I learned that the woman who reported it for an LGBT newspaper has been fired from her job. What happened to slogans about the rights of working women, when a reporter is fired for telling the truth?

In a letter to The New York Times last week, a March co-leader attempted to deflect these questions by claiming again “a sensational alt-right attack that aims to discredit the Women’s March movement.”

She is wrong. What discredits the Women’s March are the ugly statements made in its name, the telling silence when other women are expelled for daring to identify as Jews; the charges of “alt-right” against anyone who speaks up to disagree.

Last January, millions of women and men came out to speak up for our vision of a better, stronger, united America. We did not endorse divisive anti-Israel rhetoric then, and we do not now.

We marched to show our support for inclusive policies that mean a better future for every one of us — like the
historic coalitions that brought us women’s suffrage, workers rights, civil rights, and LGBT equality — efforts that welcomed the participation of Jewish women and men.

We will continue to speak out for our values. And we will keep marching.