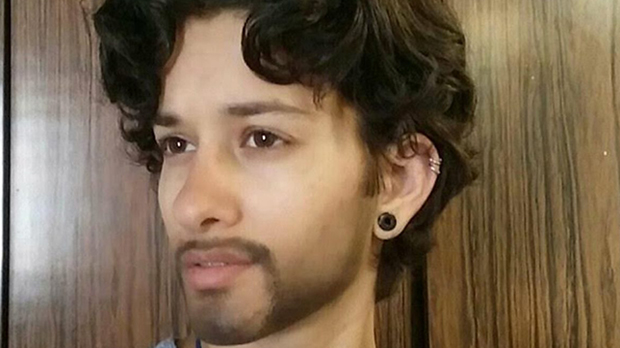 Shirel, a transgender man, speaks about struggling with his gender identity in a religious household. “Even in the summer I would wear a hoodie to hide my breasts and I would never go to the beach.” He unexpectedly found the freedom to be who he is in an LGBTQ group on an orthodox religious university at Ariel. 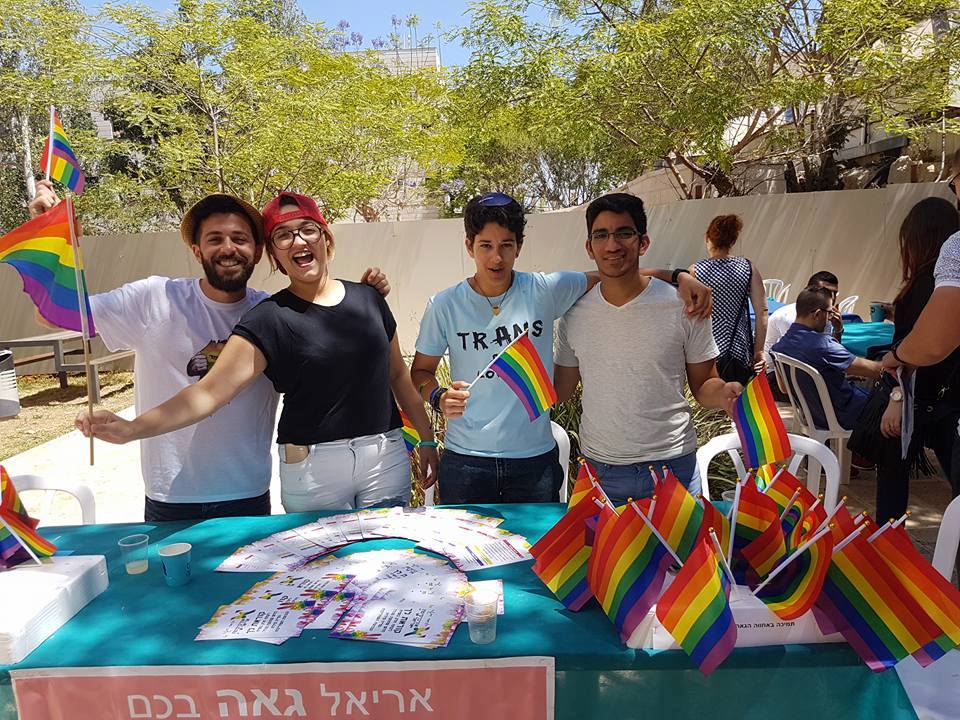 Shirel (third from left) at Pride

The first time Shirel, 25, referred to himself as a male was at the age of 15. Ironically, it was a time when the physical changes made his body more feminine. “My mother bought me a guitar and I taught myself to play,” Shirel recalls. “One day I wrote an original song and it was all in masculine [Hebrew]. It sounded more natural to me. To my friends it seemed odd, but they accepted it.”

Although growing up in a conservative religious home, as a child Shirel wasn’t aware of the gender differences and perceptions dictated by society, that there were things that only boys do and things that only girls do.

“I lived my life freely and innocently,” he says, “both in kindergarten and when I started going to school, which was religiously mixed but separate in the classes. I played with both the boys and the girls. For the boys I was too weak and not a boy like them, and for the girls I was too naughty and hyperactive. Even though it was customary to wear dresses and skirts, I was allowed in my childhood to wear what I wanted. I always liked cargos, t-shirts and sneakers, I liked playing with cars, LEGO, or playing with cousins in army games. I was not interested in all the Barbies, makeup, or dressing up. I was always a boy and there were people who got confused and thought I was a boy and it was nice and fun for me.”

The difficulty began around the sixth grade, and the physical changes made it difficult for Shirel to ignore gender.

“I felt how my body was changing and starting to look more feminine. Suddenly I no longer looked like a boy, but rather a “Tomboy” girl. There was nowhere to run and no way to hide, especially with my breasts. In junior high I started going to Ulpanit [a religious school for girls] and there was a very clear and meticulous dress code. My mother would not let me go with pants and look like a boy anymore, so I would wear cargos under my skirt. Even in the summer I would wear a hoodie to hide my breasts and I would never go to the beach. ”

With the physical changes, Shirel also started having thoughts and doubts about sexual attraction, followed by an attempt to define himself.

“At the age of 16, I had my first love. She was a straight girl who just broke up with her boyfriend and I fell in love with her, and I knew that I was not a lesbian because by definition it was a woman who falls in love with a woman. But I’m not a woman, so what am I? I started Googling and looking on the Internet and couldn’t find the information I was looking for. I found Bat Kol, which was a religious lesbian organization and that made me happy, but I didn’t feel I was lesbian, so I couldn’t relate. I was searching so hard, wanted to belong to a group, to meet someone like me to talk to.”

In an attempt to find a group to belong to, Shirel arrived for the first time at the gay pride parade in Tel Aviv. “I walked alone and didn’t know anyone, didn’t know Tel Aviv, so I did not really know where the parade was passing and I missed the booths part. But I came across a few flyers from Tehila and kept them to show my mother. ”

And then you just gave them to her?

“I didn’t know how to approach the subject, what to tell her. I had already discovered that I was a transgender, that there was a name for it, that there were others like me, so I went to her office and brought her the flyers and told her, ‘Here, take them, call them and they will explain to you.’ I was afraid, and it did not end well. She took away my cell phone, changed my number, and forbade me to continue to go to meetings of trans youth.”

His mother’s reaction caused Shirel to go back into the closet. “I just wanted to finish high school with a certificate and have 12 years of schooling while having a roof over my head and not be thrown into the street,” he explains. “And this continued until I reached university. I saw the rainbow flag printed in an ad, and I was stunned. ‘What is it doing here ?!’ The University of Ariel is extremely religious: Settlers, Hassidic people… [the rainbow flag] was not something that was natural to me in that landscape. I made sure that no one saw me getting close enough to read. I thought ‘There are people from the community here, and I am far from home, and Mom will never know, and this is right near me.’ I was excited.”

I was really happy, but I was afraid that people would find out if I went to meetings, and if my friends knew, what would they think? How would they look at me? Could it somehow hurt my studies? I didn’t go to that meeting from fear. And every time I looked to see if there was another message about another meeting and I followed the reports. Once I decided I’d just go and look. I went to the building and saw the flag next to the class. I sat outside and debated about whether to enter. I had so many concerns. Someone passed by and asked me if I was going to the meeting. I said no. In retrospect it turns out that she was the meeting’s organizer. I sat outside and did not dare enter. The second time around I gained the courage and went in.”

How were the meetings?

“Usually there were no more than a few people. There were a lot of closeted people, and we talked about community issues, about acceptance, patience and tolerance towards the community and the LGBT groups, about coming out of the closet, religion, family. It helped me to accept myself and others, and to release all the brainwashing that I underwent, for example: that it was wrong, that it’s an illness, something that is against creation, against nature, and other negative and even worse things.

“In the three years I was in the LGBTQ brotherhood of Ariel, it was my safe space in which I could be who I am after years of silence, denial and self-hatred. The brotherhood helped me release the stigmas, connect to myself, love myself, make peace with the Creator and not give up my freedom. The organizers are very uplifting and strengthening, and give a sense of confidence and belonging. Although the group is very diverse, we were all connected.”