A group of LGBT people who work in the high-tech industry used 2017 WorldPride as an opportunity to try and help the victims of the ongoing crackdown against gay men in Chechnya. 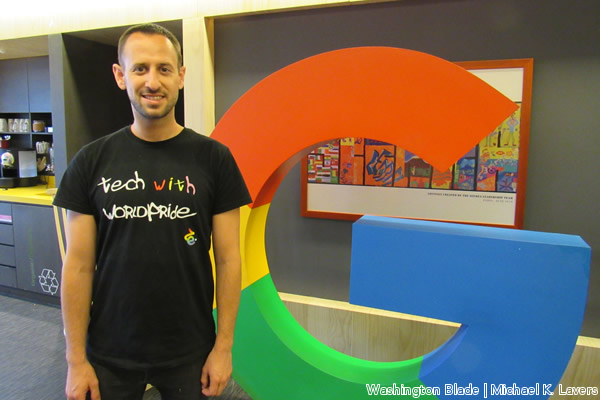 Elad Mintzer of Ze, a group for LGBT people who work in the high-tech industry, is among those who spearheaded Tech4Chechnya, a campaign during WorldPride in Madrid that sought to highlight the ongoing crackdown against gay men in Chechnya. Mintzer spoke with the Washington Blade on June 29, 2017, at Google’s offices in Madrid. (Washington Blade photo by Michael K. Lavers)

Google on June 29 hosted participants in the Tech4Chechnya campaign at their Madrid offices.

More than 20 people took part in a “hackathon” in which they sought to help develop apps and software that would allow advocates to better communicate with gay men in Chechnya. Tech4Chechnya participants also spoke on Skype with members of the Moscow-based Russian LGBT Network about how they can use technology to provide additional assistance to gay Chechens who have fled their homeland.

Elad Mintzer, the Israel-based managing director of Ze, a group for LGBT people who work in the high-tech industry, told the Los Angeles Blade the advocates with whom he and other Tech4Chechnya campaign participants spoke “need more people that they can trust to help them.”

“It’s hard for them,” he added. “We will try to help them with technology to be more efficient, so [they can] have a more safe way to talk with the refugees.” Continue reading in the Los Angeles Blade