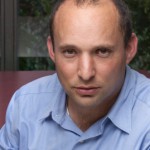 Calling all liberal foodies: restaurant venue needed where one gay couple and one religious conservative couple can share a kosher and highly publicized dinner in Tel Aviv.

Assi Azar is a prominent and openly gay Israeli celebrity currently at the forefront of a campaign seeking equality for gay couples. He and his partner have invited Naftali Bennett, Israel’s Economy Minister and head of the conservative party Habait Hayehudi, and his wife on a double date — to demonstrate how much the couples have in common. Bennett has accepted Azar’s offer; they haven’t picked a time and place yet. No one is expecting any major breakthroughs during the dinner – both sides are coming from such polar opposite positions – but there is hope that it will kick off a better conversation between the left and the right over gay rights.

The invitation comes amid a backlash against the Israeli Knesset by the gay community and its hetero supporters. The Yesh Atid political party is trying to pass a law that would grant same-sex couples with children tax benefits equal to those of straight parents. The bill, proposed by politician Adi Kol, would be in addition to the current tax benefit for women with children–a benefit that exists to encourage women to join the workforce. Ayelet Shaked, Bennett’s #2 in the Habait Hayehudi party, vetoed the bill, saying it would mean the government would be recognizing gay partnerships as a family unit for the first time.

Shaked has been a target of verbal abuse and serious threats ever since.

Bennett wrote on his Facebook page that while he and his party support some aspects of the legislation, coalition members haven’t had enough time to discuss it. “There are more nations in this world that don’t support same-sex marriage than countries that do. More than that—there are several European nations that don’t recognize cohabitation between same-sex partners. Do we need to be ahead of countries like Greece and Germany? Does the categorization of Israel as a Jewish state have anything to say on the topic?” he wrote.

Read the full story on Vocativ