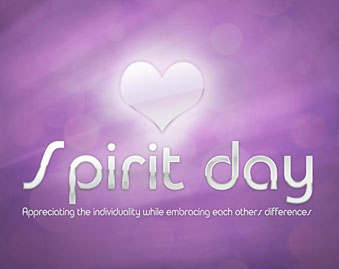 Today is Spirit Day, the annual day in October when millions of Americans wear purple to speak out against bullying and to show their support for lesbian, gay, bisexual and transgender (LGBT) youth. 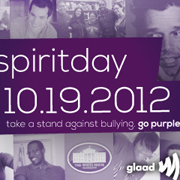 Spirit Day, organized by GLAAD, was started in 2010 as a response to the young people who had taken their own lives. Observed annually, individuals, schools, organizations, corporations, media professionals and celebrities wear purple, which symbolizes spirit on the rainbow flag.

Last year, GLSEN found that 63.9% of LGBT students reported being verbally harassed, while another 27% reported being physically harassed, and six out of ten felt unsafe at school. For students of color, more than half of African American students felt harassed and unsafe in school as found in Shared Differences, which highlights bullying experiences for LGBT youth of color.

This year, the all-day-event is getting much wider attention across America: Yesterday GLAAD released a statement according to which all six major American sports leagues – the NBA, the NFL, the NHL, Major League Baseball teams, Major League Soccer and Nascar’s diversity program – are all participating in the annual event to help combat bullying.

All of Viacom’s brands and channels, including MTV, VH1 and BET, are participating, as are NBC Universal’s holdings and television hosts on Access Hollywood, E! News. Chelsea Handler will wear purple on “Chelsea Lately”. And that’s really just the tip of the iceberg:  Facebook launched a new bullying prevention resource page and urges all users to add a purple tone to their profile pictures; Andy Cohen spoke about the importance of standing up against bullying and supporting LGBT youth on his popular show ‘Watch What Happens Live’ yesterday; The National Black Justice Coalition, Trans People of Color Coalition, Gay Men of African Descent, LGBT Leaders of African Descent, API Equality- LA, Gay Asian Pacific Island Mend of New York, and National Youth Pride Services are among community partners, all creating awareness and empowerment.

Also, a huge line of A-list celebrities are taking  part in this day, spreading the work and wearing purple today. Among the Jewish celebrities participating are Glee’s star Dianna Agron, author Stephen Fry, William Shatner, Henry Winkler, Fran Drescher and many others. “From sports leagues to faith institutions to national monuments, schools and celebrities, millions of Americans will unite this week in an unprecedented show of support for LGBT youth and in a stand against bullying,” said GLAAD President Herndon Graddick in the press release. “At a time when 8 out of 10 LGBT youth report being harassed at school, it’s now more important than ever that we let every young person know that it’s okay to be who you are.”

How to turn your profile picture purple? Click on the image below for instructions!