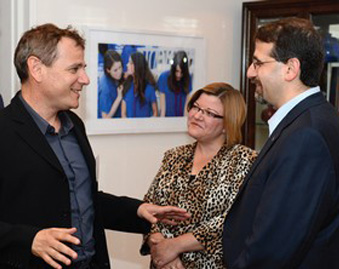 Jonathan Danilowitz, a former El Al service manager who sued the company in 1989 for refusing to recognize his same-sex partner as his common-law spouse, was invited to the US embassy in Israel for the IDAHO day event – and writes about it.

The invitation was so unexpected, and email scams are becoming so sophisticated, that I was sure this was one of the latter: “The Ambassador of the United States of America… a reception in honor of the Lesbian, Gay, Bisexual and Transgender (LGBT) Community in Israel.”
Well really! How stupid did the sender think I was? Except that it wasn’t a scam, and the US ambassador to Israel, Daniel B. Shapiro, really did “…request the pleasure of [my] company” at the reception at his elegant Herzliya Pituah home last Thursday.
It was in 1976 that I responded to an ad in the “Personals” of The Jerusalem Post, suggesting support for the gay community. I needed help to escape from the stifling and frightening prison, aka “the gay closet.”
The Society for the Protection of Personal Rights had recently been established – the very first gay-rights association in Israel, probably in the entire Middle East, and then still one of the few in the world outside of the US.
It was there that I took my first tottering steps as an openly gay man. It was there that for the first time in my life I met gay men and women who were already comfortable with who they were. It was there that I discovered that I wasn’t alone, wasn’t sick, wasn’t a criminal and wasn’t destined for a life of despair. I learned that I too was entitled to human rights, even though I was one of the mostly-still-hated 10 percent.
Did I mention the stifling closet? Only 12 years later I was already ready to sue my employer for workplace discrimination against me simply because I am homosexual. My partner and I (we’ve been a couple now for 33 years) discussed strategies before I went to court: first the Tel Aviv District Labor Court, then the National Labor Court and finally the Supreme Court. My employer lost at each level and today my name stands on one of 10 most important Supreme Court cases (at least the last time I checked at the Supreme Court Museum). Talk about gay pride.
But that’s not the reason Ambassador Shapiro invited me.
PFLAG (Parents & Family of Lesbians & Gays) is a US-based self-help organization I once encountered on a trip to the US. My own family was ultimately very supportive, even though their Orthodox religious background had placed them in a quandary. But I knew from many friends that many families struggle and suffer terribly when a child/sibling finally comes out of the closet. I saw the necessity for, and was instrumental in, founding Israel’s version of PFLAG, called TEHILA, a Hebrew acronym for Support for Parents of gay/lesbian children.

It is no exaggeration to say that the now 20-something volunteer-based organization has saved countless families from collapse, not to mention lives. (Over 30% of teenage suicides are gay, even though they comprise about 10% of the population.) I was deeply honored to be able to accept the invitation on behalf of the hundreds of TEHILA volunteers, nameless they shall remain, and I was deeply honored to be at the reception last Thursday, rubbing shoulders with parliamentary dignitaries from a range of political parties, representatives (including at least two ambassadors) from other embassies, religious leaders, and some of the great movers and shakers of Israel’s vibrant LGBT community.
Read the full post on the Jerusalem post