Christian convert, 24, whose five uncles were jailed in Israel for terror activity, says he’ll be killed if forced to return to West Bank, and found compassion where he least expected it, and most needed it 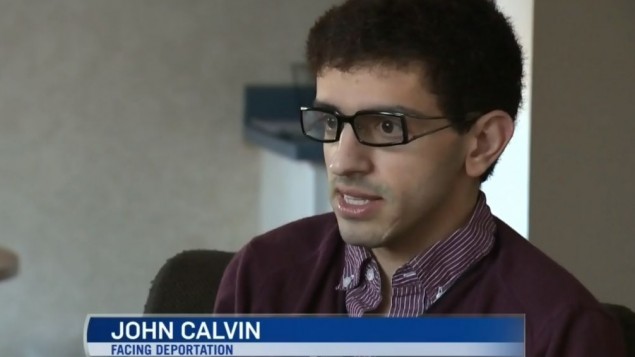 A gay Palestinian asylum-seeker who converted from Islam to Christianity said he faces deportation from Canada for his close family ties to Hamas, and fears he will be executed if forced to return to the West Bank. He said he feels “like a dead man walking.

John Calvin (not his birth name) told CTV News in Edmonton, Canada, on Saturday that his family was among the founders of the Islamist terror group, but said he rejected Hamas’s extremist ideology and converted to Christianity at 18.

Calvin, 24, who was born in the West Bank in 1990, said that his family reacted angrily when they discovered his conversion, and that he narrowly escaped several attempts on his life by his father. “I ended up jumping out of the window and I escaped and was helped and headed into a different city in the West Bank,” he told Canada’s Global News.

He eventually fled to Canada, and applied for refugee status in 2011. Shortly after, Calvin enrolled in a Toronto bible college on a scholarship.

He said his refugee application was suspended in 2012, and on December 31, 2014, he received an official letter of deportation. He was given 30 days to appeal.

The trouble at home started when, as a teenager, he began questioning the beliefs and actions of his parents, both ardent Hamas supporters.

“I ended up having a big fight with them, and ran to Israel,” the youth told The Times of Israel in a phone conversation Monday from Edmonton, Canada, where he eventually sought political asylum. A tragic experience in an Israeli prison cell that night sparked a chain of events which would turn the teenager’s belief system on its head, leading him to convert to Christianity and change his name to John Calvin, after the 16th century French theologian.

“A horrific incident happened to me in jail. I was raped by a Muslim man, and ended up getting assistance from Jewish psychiatrists and from the jail administration, which helped me through the worst thing that ever happened to me in my life. That ended up changing my life entirely. The entire staff tried to help, including the prison warden… They tried to keep it quiet because of the culture in jail and even followed up with me after my release. This was not the image I grew up with about Jewish people.”