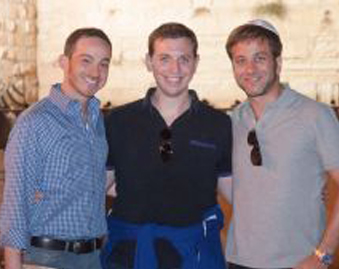 The Hebro and the JCC  trips to Israel, both co-sponsored by A Wider Bridge, are making the LGBT festivities the center of their Israel itineraries – and non-Jews are flocking. 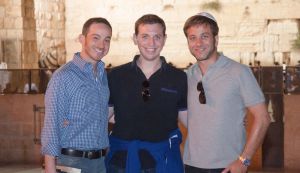 An organized group tour to Israel usually includes visits to the Western Wall, Independence Hall, Masada and the Dead Sea, so as to check the boxes of Israel’s identity: religious, political, historical and geographical.

But for two groups zipping around the country this week, Israel’s emerging identity as a global gay capital is of equal importance – and the beaches of Tel Aviv, now blanketed in rainbow flags and Pride revelers, is an essential destination.

On Monday, the Jewish Community Center Association’s first LGBT delegation arrives for a 12-day trek through the Holy Land, promising its 20 participants to “see Israel in a whole new way.” A trip organized by the New York-based gay Jewish nightlife group Hebro arrived on Friday with 25 participants.

“I’ve been wanting to do this for a long time,” said Aliza Orent, organizer of the JCCA trip and director of Jewish Life and Learning at the JCC in Austin, Texas. “It’s been a passion of mine and the stars aligned.”

Those stars likely included the swell of international press Tel Aviv has received as a gay tourist destination in recent years, the accumulation of rights for same-sex couples in Israel, and recognition by United States Jewish organizations that this is a grand opportunity to engage a population only relatively recently embraced by the mainstream American-Jewish community.

Israel trips targeted to the LGBT community have been around for several years already, including LGBT-themed Birthright trips. And just last fall, a group of U.S. LGBT leaders traveled to Israel at the invitation of the American Jewish Committee.

But JCCA and Hebro trips point to a new trend in which Tel Aviv Pride is the main attraction. This reflects the growing popularity of that event, which has grown into a week-long, citywide party claiming over 100,000 participants, including a flood of sun-hungry foreigners. Nowadays, no LGBT trip to Israel is complete without it.

Continue reading on Ha’aretz (some browsers require logging in)