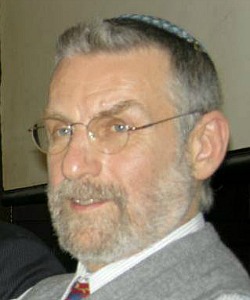 The Supreme Court’s decisions around marriage rights may have elated gay and lesbian Jews and their allies. But for LGBT Jews in the Orthodox community, the ruling might have the opposite effect. The Union of Orthodox Jewish Congregations issued a statement reiterating Judaism “forbids homosexual relationships”; Agudath Israel went a step further, claiming the “sanctity” of marriage “may have been grievously insulted by the High Court.”

Enter Shlomo Ashkinazy. A quiet but pathbreaking activist, Ashkinazy has counseled gay and lesbian Orthodox Jews about reconciling “untenable contradictions” in their religious and sexual identities. Most recently, he’s leading a video storytelling project for Eshel, the New York-based organization which advocates for acceptance of LGBT Jews in Orthodox communities.

Ashkinazy’s personal activism stretches back much farther. In the 1970s, he became the nation’s first openly gay social-work graduate student. And in 1985, he became founding principal at the Harvey Milk High School, the first public school for LGBT students in the country.

A recent news profile described your current project as “reconciling Orthodox Jews and their LGBT coreligionists.” Can you explain?

Shlomo Ashkenazi: Long before taking on a formal role at Eshel, this has been a personal goal and mission of mine. Ever since I first became Orthodox in the early 1980’s, I have been very troubled by the number of people that I meet who told me that they gave up being Orthodox because they could not reconcile what to them seems like an untenable contradiction. I have been running a support group for Gay Orthodox Men since 1983. I’ve also made myself available to hundreds of people who were seeking individual counsel about this conflict.

Read the full interview on The Forward