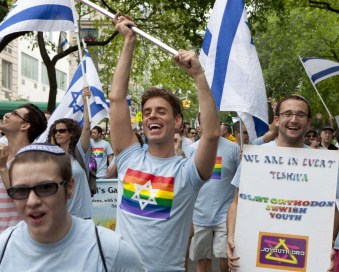 Sunday, the Celebrate Israel Parade in New York commemorated its 64th anniversary with purportedly the largest gathering in the world saluting Israel. Celebrate Israel transcends religious and political differences to represent the American Jewish community and celebrate our common history and solidarity with fellow Jews here and in Israel. This year, there was even more to celebrate.

For the first time since the parade was established in 1964, a queer Jewish group was allowed to march and explicitly represent lesbian, gay, bisexual and transgender Jews. This is a monumental and historic milestone in the effort for full LGBT inclusion in Jewish life. In 1993, LGBT Jews were excluded from the parade when the parade board uninvited the LGBT Synagogue Congregation Beth Simchat Torah. In subsequent years the parade has prevented visible LGBT inclusion one way or another. In 1999 CBST was allowed to march as part of a cluster of other synagogues if they agreed not to use words like “Gay, Lesbian, Bi or Trans” or anything “recognizably gay” on their banners.

Personally, I remember learning about this policy when I was in high school. The message to me was that gays were not welcome or wanted in the Jewish community. There was something so shameful, embarrassing and distracting about displaying the word “gay,” that even in a secular Jewish event, it must be silenced and closeted. Closeted and confused myself, I would attend the parade yearly with my entire family and feel completely ostracized by my own people. I knew I was not alone in feeling this rejection. Thousands of other LGBT Jews endured this sadness for years. I vowed then that there would be a day when large rainbow flags, smiling LGBT faces and Jews of all orientations can celebrate Israel down 5th Avenue with the rest of the our community. This day has finally come.

Spearheaded by Orthodox yeshiva high school students, members of Jewish Queer Youth (JQY), a new non-profit organization for Orthodox LGBT Jewish Youth, appealed the Jewish Community Relations Council, which organizes the parade, for full LGBT participation at this year’s parade. As Co-executive Director of JQY, I can attest to how important this effort has been to Jewish youth and how strong the love for Israel is among the LGBT Jewish community. One 17-year-old Orthodox 11th grader even came out to his grandmother, who had been a past parade director, in the effort to secure our inclusion in Israel’s celebration. These heroics by such young brave Jews are nothing short of inspiring. Eventually, the parade informed JQY that we would be allowed to march.

The members of Jewish Queer Youth decided to open this opportunity up to the entire LGBT Jewish community and straight allies. Nearly all the major LGBT supportive Jewish organizations have united in participation. Co-sponsors of the LGBT marching group include Congregation Beth Simchat Torah, A Wider Bridge, Eshel, Keshet and the Schusterman Family Foundation. Together we marched as one family in celebration of our homeland.