A Wider Bridge’s Executive Director Arthur Slepian wrote an op-ed on JTA following our “Beyond the Bridge” event at Creating Change Conference in Chicago that was overtaken by anti-Israel protestors. 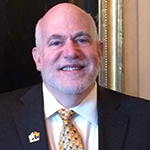 The central prayer of our people, the Shema, is often interpreted as a message of unity and the interconnectedness of all things. This can be a powerful force for bringing people together, for helping us to see the common humanity and the spark of the divine that unites us, whatever our seeming differences may be.

But last week we saw something else, how a claim of interconnectedness can be used as a wedge to drive us apart, to turn people who might be allies on many issues into bitter enemies because of disagreement on others.

Last week, A Wider Bridge was set to sponsor a program at Creating Change, the nation’s largest conference of LGBTQ leaders, presented by the National LGBTQ Task Force. The mission of A Wider Bridge is to build connections between the LGBTQ communities of Israel and North America, and our guests were two leaders of The Jerusalem Open House, an essential organization that works to build LGBTQ community in Jerusalem in a challenging and diverse environment.

Jerusalem Open House has spent the past six months helping its community recover and heal from the horrific violence at last summer’s Jerusalem Pride Parade, which resulted in the murder of 16-year-old Shira Banki and the serious wounding of several others. Leaders of Jerusalem Open House came here expecting to be embraced and supported by the LGBTQ community at the conference.

Instead, our program was disrupted by protesters, a threatening atmosphere of hate and intimidation was created, and the Jerusalem Open House leaders were not permitted to speak. Many of the Jewish participants at the conference were truly shaken by the ferocity of the protest, especially the anti-Semitism that was on display in some parts – including the chant of “from the river to the sea, all of Palestine must be free.”

What we came up against was “intersectionality,” a theory which includes the axiom that all oppression is rooted in the same causes, that struggles that might seem distinct from one another are really the same and must be fought together.