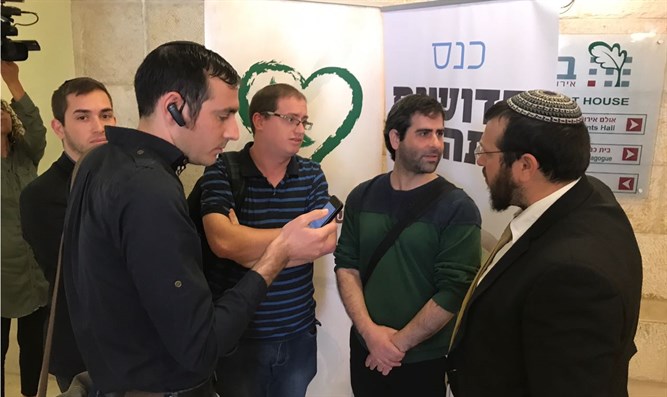 Rabbi Amichai Eliyahu, one of the initiators of the conference, told Arutz Sheva that at present there is a taboo on the entire subject. Whoever discusses the matter from an academic perspective draws fire and members of the community who wish themselves to practice Halakha meet a brick wall. We joined up with members of the Bik’dusha organization who wished to organize a professional meeting with psychologists and affiliated people who can expose the rabbis to a pure viewpoint which will enable members of the community to live their lives. This is also a call to policy makers to invest time and funding in this direction.

“People invest in plastic surgery nowadays, so we should invest budgets in surgery for the soul as well. We should learn to speak pleasantly and sweetly to this community,” added Rabbi Eliyahu. He stressed however that LGBTs are living a life which contradicts the Torah.”There is no Jew who studies Torah and can say that this is halakhically permitted. The Torah calls this an ‘abomination’ and we want to understand why Hashem assigned this [test] in our generation. How can one live with this, what does one do with this challenge and how one can find loopholes for these people.”

Efforts to change sexual orientation have stirred controversy and drawn sharp criticism, which conference organizers denounced as an attempt to silence a legitimate viewpoint advanced by some professional academics.

Because of the vehemence of such disagreements, the conference wanted to deal with the issue of homosexuality in the religious community “away from media pressure” and without the need to be “politically correct,” said Rabbi Amihai Eliyahu, head of the Union of Community Rabbis, which sponsored the event.

In addition, organizer wanted to raise the idea of using state funds to pay for therapy for people seeking to deal with or change their sexual orientation, similar to sex-change surgery is funded through the “healthy basket” of state subsidized treatments.