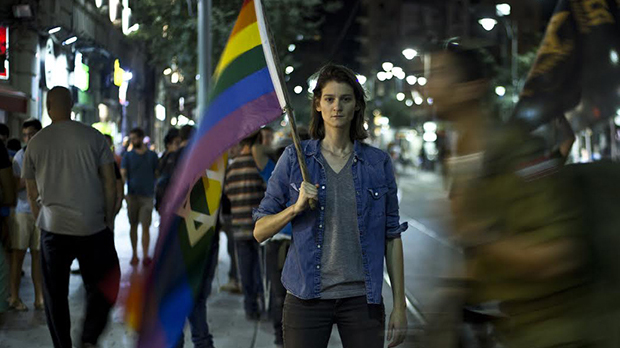 A new documentary short looks at being Orthodox and LGBT in Israel. Lesbian activist Sarah Weil discusses The Meeting Place project which fosters unprecedented dialogue between the LGBT and Orthodox communities. In 2016, Sarah toured the United States with A Wider Bridge to discuss her work.

A new 5-minute video documentary that was created by the Hanns Seidel Foundation Israel and their Building Bridges project is going viral on social media in Israel.

The video features an interview with Yacob Stein, an Israeli gay man from an Ultra Orthodox background who was pressured into trying gay conversion therapy. In addition, Sarah Weil talks about how she started The Meeting Place after the stabbings at the 2015 Jerusalem March.

In Sarah’s words, “I struggled for many  years with my sexual orientation. I tried to change myself…. [After the march] I came here [to Zion Square] with this flag….everybody under the sun was here in Zion Square participating in this dialogue.”

Back in January 2017, A Wider Bridge raised $5,000 to support The Meeting Place through our Impact program. This program crowdfunds Israeli LGBT community projects.

Watch the 5-minute video below.