The LGBT protest in Beer Sheva on Friday ended up with an arrest of a gay activist, after he defended his mother for carrying a sign that reads “My Son is Gay, so What?!” 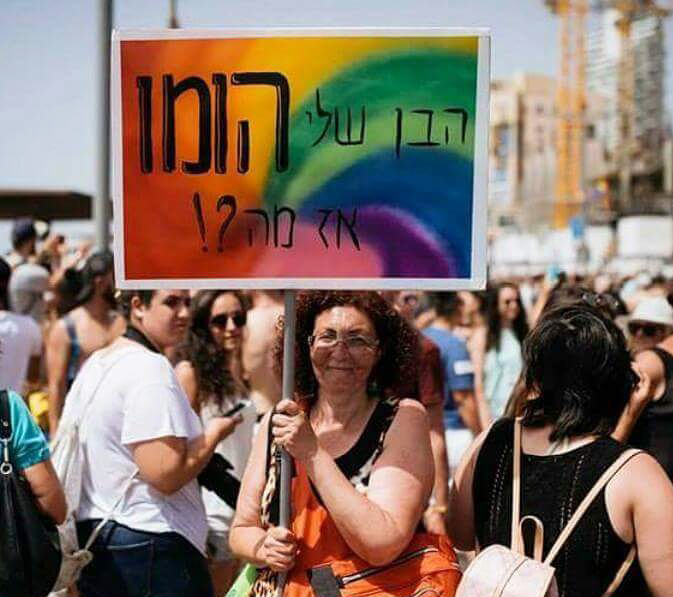 Hundreds of LGBT people and allies from around the country gathered in Beer Sheva to participate in the protest in front of the City Hall.

During the demonstration there was an incident followed by one of the participants’ arrest. The incident began when one of the policemen guarding the rally turned to Ira Sekler, mother of community activist Shay Sekler, who carried a sign for the Tehila organization (the Israeli PFLAG) that read “My son is gay, so what?!” and told her – “I could vomit on your sign.”

Shay, who was standing beside her, responded aggressively to the policeman and started filming him with his phone, asking him to identify himself.The officer refused to be identified, and arrested Shay for assaulting a police officer.

“This moves us a step higher”, said Beer Sheva’s Proud House spokesperson in response. “Apparently the police not only reinforces the violence but acts in a very ugly way.”

The case, which took place close to the end of the protest, angered the participants, who left the city hall area and began to walk on Rager Boulevard, the main street in Beer Sheba, where they were not allowed to march, carrying rainbow flags.

The organization Hoshen, the educational branch of the LGBT community, also responded to the incident: “We turned to our partners from the Nir Katz Center for LGBTphobia to advance together, to expand and enhance their activity in the Israeli police and in the Border Police in particular,” reads an organization statement, “The last day’s events are further evidence of the acute need to deal with issues of sexual and gender identity among the security forces, and we are ready and willing to work for the desired change. Our way is through education and we are hopeful and confident that it can bring about a fundamental change in attitudes. Only education brings change.”

On Wednesday, a day before the protest, Be’er Sheva police detained several people from the city’s LGBT community, with one of them saying he is considering suing the state.

“When I arrived at the [police] station they told me that I was suspected of threatening to cause harm. I sat behind bars for three hours, and when I went in to the investigator she told me, ‘Okay, I have no idea why they called you in; we have nothing against you, you can go home.’” Read about the Wednesday arrests on Haaretz