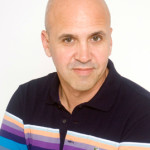 Gal Uchovsky is a TV personality, film maker, journalist and gay activist. Mr. Uchovsky is the president and co-founder of IGY, Israeli Gay Youth Organization he established in 2002 with Yaniv Waizman. The organization has since become the biggest and strongest LGBT organization in the country.

The monthly gay magazine Pink Time named him in 2010 “The most influential LGBT person in Israel”.

Mr. Uchovsky was born in Hadera. After his military service in the air force, he moved to Tel Aviv and studied photography at “Camera Obscura” and then law at Tel Aviv University. He worked for seven years as a flight attendant for El Al.

Mr. Uchovsky started his journalism career in 1983 at the famous Tel Aviv local paper “Ha’ir” after writing a controversial letter to the editor about El Al flight attendants. He began writing in the culture and entertainment section, and also wrote a column under the pen-name Moshe, about the life of a gay man in the big city. Since then his career blossomed.

In 1990 he became editor in chief of Ha’ir. And later went on to become the art and leisure editor for the Daily Maariv. Today he writes a weekly column for Mako, one of Israel’s biggest web sites.

As a culture journalist Mr. Uchovsky was one of the leading voices in the new-media revolution that happened in Israel in the 80’s. He was tagged as the spokesmen for the new Tel Aviv after standing against the city mayor during the Golf war. He is also perceived as one of the most prolific music critics in his country.

Uchovsky’s first contribution to the TV and movie industry in Israel was producing the soundtrack to the film “Song of the Siren” directed by his partner Eytan Fox in 1994. Three years later came his first experience as a screenwriter, when he wrote about a third of the first season of the successful television series “Florentine”. In 1998 he wrote his first feature script, the television drama “Gotta Have Heart” (‘Ba’al Ba’al Lev’), directed by Fox.

“Yossi & Jagger” in 2002 was Gal’s first experiment with film production. Later, he wrote and produced two more films that Fox directed and gained the critics’ acclaim, “Walk on Water” and “The Bubble.”

In 1997 Uchovsky added TV hosting to his resume, starting with Channel 2’s cultural program “The Inner Circle”, which aired for three full seasons.

In 2006, he became one of the judges of the Israeli version of “American Idol”, where he was labeled “The Israeli Simon Cowell”. This made him a household name in his country. After he retired from the show, he moved to host numerous daily and weekly shows, as well as serving as a judge on the Mediterranean reality music competition show “Eyal Golan is Calling You”.

Last year Mr. Uchovsky took part in the reality show “GoalStar” as the first ever gay man to be part of a celebrity football team.

In 1988 he met his partner, film director Eytan Fox. They live together in Tel Aviv. This summer they celebrated their 28th anniversary.