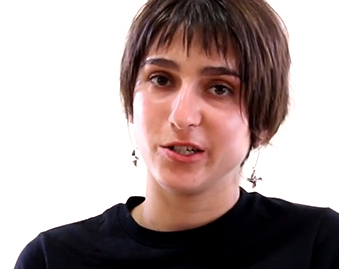 During her trip to Israel last year, 22 year old content coordinator from Orange County Rebecca Levin wrote a blog for our website, documenting A Wider Bridge’s 2014 Israel Mission. Now it’s time to meet her in person. 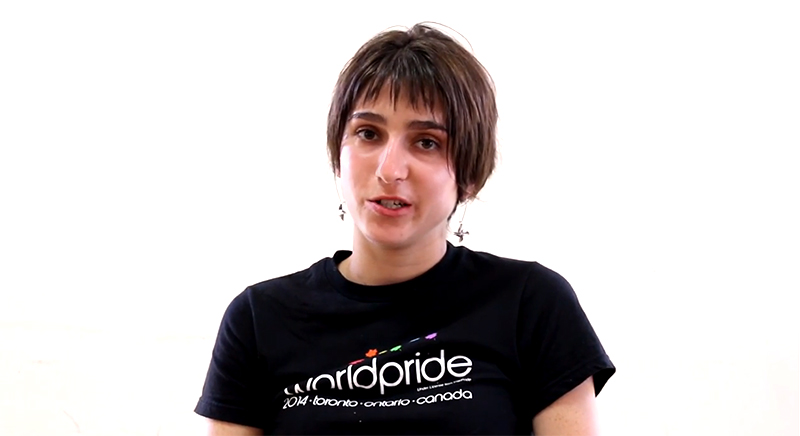 “I knew I was bi-curious at least when I was in high school because I had a big crush on a girl,” Rebecca says in a video interview that was shot in Israel, as a part of our ‘Friends of A Wider Bridge’ video series. “I identified as bi-curious for a while and I didn’t tell anybody – I told my mom but she didn’t believe me. “

“When I was in college and just got out of a serious relationship that’s been going on for two years and I was just over men and wanted to try something new, so I went on a dating website called OK Cupid and I found a woman named Carrie and we started dating, we fell in love, and I realized I wasn’t just bi-curious, I was bisexual or even gay and I didn’t know which, so I identified as gay for a while and now I identify as queer because I’m not sure how far on the spectrum I am.”

“Eventually Carrie told me to that she would want me to come out on Facebook, that would identify as a big coming out moment, like I tell everybody I know OK, I’m queer, and I have a girlfriend who I love.”

A few years ago, Rebecca went to Israel for the first time on her Birthright trip. Going there again with A Wider Bridge gave Israel a whole new meaning for her. ”I decided to come back because I wanted to see a different perspective of Israel,” she says. “When I went the first time I identified as bi-curious, I wasn’t looking to be with a woman necessarily, so now I wanted to see the LGBT side of Israel which I didn’t really see on my first trip.”