No, you’re not seeing double: Haviv and Itzhak Maman, twin gay brothers, want to make Mediterranean music history by being the first publicly gay singers in the genre. 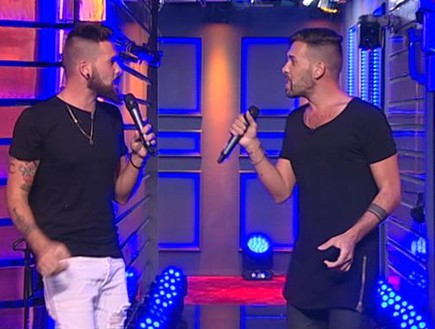 Haviv and Itzhak Maman are twins aged 27 who share much more than a birthday and parents: both gay, both cosmeticians, both bearded, and the singing ability of both impressed the judging panel in the reality competition TV show “Eyal Golan is Calling You.” If they manage to fulfill their dreams, they will make Mediterranean music history by being the first publicly out singers in the genre.

“It’s not so normative that we are in the show, it’s not our comfort zone. This is a jump into the water,” says Itzhak in a first interview with Israeli website Mako. “We are different from the other contestants, and they’re not friends outside of the show. But they are amazing people.”

Do people already recognize you on the street? Are there any comments?

Itzhak: “The reactions are insanely supportive. People stop us on the street, calling on us to sing.”
Haviv: “Since the last episode there were comments, wow. I was recognized at the post office. Older women are crazy about us.”

Haviv and Itzhak Maman were born in a five minute margin in Maalot, in the western Galilee. During their army service (served in combat) they figured there was not much to do in Maalot and therefore the majority of their free tim was passed in Tel Aviv. Both are currently working in cosmetics: Itzhak founded his own business two years ago. Haviv is a make – up artist.

Recently they’ve started to perform at bachelorette parties together under the name “Mu-shlermet” (‘Per-fect’). Meanwhile, of course, they concentrate on progress in the TV show. The judges really liked their performances, but also gave them criticism. They have to work on harmonies and the dynamics of their voices. Haviv says he listens to all the judges: “The judges make us understand that we are not just a gimmick and not just beautiful on screen. Yaron Ilan [famous Israeli Mediterranean music radio host who’s also a judge on the show] said that we can make history in Mediterranean music.”

If all goes well, Eyal Golan will call Itzhak and Haviv and they will win the competition. They will make history as the first out of the closet Mediterranean singers.

Haviv says he has never officially told his family that he’s gay, but his mother has always known. “I’ve always had nuances,” he recalls in the Mako Pride interview. “At 16, I discovered this world. At the time I volunteered at Magen David Adom (emergency care), so I used to say at home that I was going to MDA parties, and instead I used to sneak out to gay parties up north. One day Itzhak followed me and found out I was going to a gay party.” Haviv has had a partner for three and a half years, and for personal reasons he prefers not to reveal his name.

The parents realized ‘officially’ that Haviv was gay in 2006. “During the Second Lebanon War, we were moved out of the house. We were moved to a hotel and I got bored, so I decided to go around in drag. So I went to a club in Jerusalem and went in drag. When I returned my mother caught me with make-up and yelled to my father ‘come see what your child is doing!”

For Itzhak, coming out was less dramatic. “One evening I went out to a club. I was feeling good and in the middle of the night I decided to tell my family in a group whatsapp message,” Itzhak recalls. “I stood in the middle of the dance floor and wrote a message: ‘Dear family, I am writing to you now, but I remain the Yitzhak you know. The same eyes, the same feelings. I just want to tell you I like men.’ My sisters wrote, ‘crazy about you’ and my mother wrote that I will always be her son. I never felt homophobia or non-acceptance from the family or the surroundings.”

“There was no drama, but I’m sure it was difficult for them,” says Haviv. “In our family, the children come first and it was clear to everyone that first you accept it, and then deal with it. I refused to believe at first that he was gay, and even for me it was hard to accept. I was a bit scared that my friends would love him more and maybe it would take focus, but I quickly realized that this was actually a gift: that I have a twin brother who’s also gay. and no, we have not fought over a guy. Never.”

Four years ago Itzhak met his partner and the two became engaged last year in Berlin. It happened during gay pride parade. He stopped the movement of people, took a megaphone and announced: “I want to do something that I was planning for a long time.” He went down on his knees and proposed, singing a famous Israeli song “With this ring I swear.” These days, they are planning their wedding ceremony.

Today, Itzhak says, it became an even larger family. “We are a foursome,” he says. “Our partners are best friends. Every Friday we barbecue, the whole family participates, the whole neighborhood comes over. Our father had a very hard time with it, he took it to a very bad place. Thoughts of primitive man from the 80s. But now he sees that the sky has not fallen. He watches the show and is very proud of us. This is my victory.”