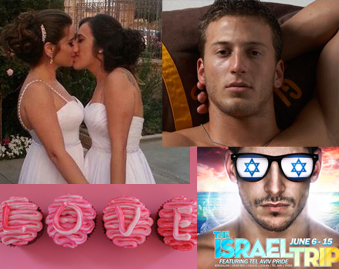 The month of February may have already passed, but we would like to say a proper goodbye and check out the most popular stories on our website in February 2014. From our popular trips announcements to the American Jews’ support for same sex marriage and Michael Lewis’ bisexual photoshoot. But who’s number one? Here’re our top five stories this month!

This month A Wider Bridge announced its exclusive sponsorship of the upcoming Hebro Israel & Tel Aviv Pride trip, and in addition to that we are offering one land-based scholarship (retail value: $2,389) for this special journey. This offer turned out to be one of the most popular pages in our end-of-the-month traffic statistics. Check out the story here, and by the way- there’s still time to apply!

Us Jews were so proud of ourselves this month because a new poll released on February 26, shows that a majority of Americans support same sex marriage. The group with the largest percentage expressing support was practicing Jewish Americans, 83% of whom came out in favor. Read the story here

Turns out that Israel is not very popular in New Zealand. But despite the fact that BDS Campaigners have fled in their minivan to Wellington to protest against the performance of the world renowned Dance Company Batsheva at the New Zealand Festival, the Embassy of Israel announced that they will be participating in Auckland’s annual Gay Parade on Saturday the 22nd of February. This announcement became our #3 most popular story this month, and there was also a follow-up story, with a photo of the Israeli float in the parade. Yeshar Ko’ach!

What a sexy story! Famous Israeli model bares all in a steamy photoshoot for an American magazine, photographed naked with a man and a woman – this story went viral in our social media accounts, some of you were exposed to Michael for the first time. Though the magazine photos are considered as more artistic than just a naked photoshoot, there’s still a lot to see! Check out the story here

#1/ Jews in the Heart of Valentine’s Day

February was definitely the Valentine’s Day month! Though Jews have our own holiday of love, this year Los Angeles’ synagogue held an LGBT Jewish  speed dating, and even before that, the Jewish connection to this holiday has been strong. This special Valentine’s Day story from JNS is the most clicked-on story on our website this month! And only proves that not only do we have a special connection with this holiday, but also – we love to love!