Uri Kukiya, a Hapoel Ramat Gan player, has come out as the first ever Israeli gay basketball player: “Those who live in the closet fear terrible things will happen.” He knows that there’s still a long way for the change in people’s perception to occur (“the audience still uses ‘homo’ as a curse to call opponent team players) and wants to become a role model. To read and to admire. 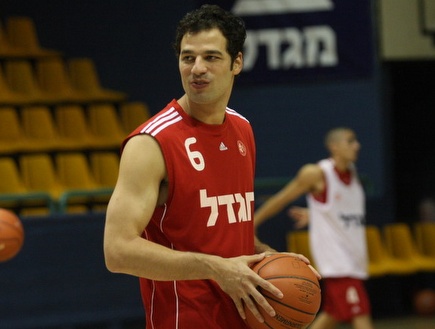 At the age of 36, Hapoel Ramat Gan player Uri Kokiya made a dramatic decision in his career and decided to be the first basketball player in Israel to come out as gay. “It’s something I’ve been thinking about for many years,” he told Israeli Sports channel in an exclusive and moving interview. “To my friends and family I’ve been outside the closet for several years now. It was important for me to do this publicly and therefore I am here.”

Kukiya played in the national league and has been for many years a known name in the Premier League – playing in Hapoel Jerusalem, in Hapoel Tel Aviv, in the Upper Galilee and the Ironi Nahariya teams. He was a member of the enlarged Israeli team for the European Championship in 2009. He retired in the summer of 2014 from an active game to became coach Danny Franco’s assistant in the historic championship season of Hapoel Jerusalem, and in 2015 he returned to being an active player and now he and his team, Hapoel Ramat Gan, are competing for a ticket to the Premier League, something that hasn’t happened for this team in a while.

Kukiya is more confident than ever. He is not afraid to put his heart on the table and wants to tell his story so that others like him will not be afraid to take the plunge. “I think that the main reason that I’m doing this right now is first and foremost for me. I went through a process, I have a partner and a kid. The second reason is for the public. I want to show that you can make a long and glorious basketball career even as ‘a homo.’ I was in Jerusalem, Ramat Gan and Nahariya, and everyone accepted me. The fear of coming out of the closet is unrealistic. When you’re in the closet it always feels like it’s a big disaster to be gay. My additional reason for doing this is to show teenagers that it’s ok to be different, you can always get professional help and still do what you like.”

Kukiya admits that for many years he was thinking about taking this step. “I came out in the basketball world and everyone knew and in Jerusalem when I was assistant coach, my boyfriend came to all the events. I didn’t hide anything walking on the street, but there is a formal step. It could have happened two years ago, but it’s happened now.”

No matter how you look at it, you’re the first in basketball. How does it feel?

“I had a few days of thoughts and excitement about something new. It always raises questions, but I feel whole, I want to influence and help. I went through a process and I am whole with myself.”

It’s a sexist, aggressive and physical sport with prejudices. Did you take this into account?

“Look, I think that if you look at it broadly, what I have understood to this day is that basketball is quite similar to the current state of society. Kids, 8-10 year olds who want to insult somebody – they call him a homo. When basketball fans wants to insult an opponent player they call him homo. It’s rooted in our culture and because the sport is more publicized, of course it’s a higher profile, but we’re a mirror of society. ”

The basketball player says that in retrospect he thinks he always knew he was different. “Toward the age of 17-18 when sexual impulses arise, you begin to feel even more different,” he says. “Sports is a place for young people, but 18 years ago there was no Internet or awareness. There were no forums and support groups, so you feel the loneliest in the world and that there’s something wrong with you. Then slowly you go through a process and to my joy I met Sharon Drucker, who sent me to a therapist named Avi Lichstein who changed my life. He made me understand that I’m normal and just different. Not less than– different. ”

Has the locker room become a scary place?

“I talked to people because I had such thoughts. But high-tech companies, large companies, board meetings and the board of directors– everyone tells the same stories. We are in sports clothes and they are in suits or jeans, and that guy talks about that chick and the other talks about that homo guy. It’s the same thing everywhere. ”

Darryl Monroe and Amar’e Stoudemire, for example, talked quite harshly about the possibility of bumping into a gay player in the locker room.

“I never played with them, but I have a chance to compete against Monroe. I cannot say what’s going on in his head. I don’t think I need to change my feeling because it doesn’t suit him. In every office there can be a homophobic worker. It doesn’t say anything about the one who’s gay, it says a lot about the other person. ”

Kukiya currently lives with his life partner Joey, a dancer by profession, and their little girl. Joey was an obvious part in Uri’s decision to come out. “We talked about it a lot – Joey comes from a different world, the dance, it’s different from [Sports], but it’s clear that he also came out early, and he’s happy for me and glad we did it.”

When did you come out of the closet to the family?

“Around the age of 25. The feeling of living in the closet is lonely, terrible and it feels that no one will love you, but from the first day I had support, and parents who chase after me to every game, and the youth in Rehovot and Yavneh told me not to retire and that they respect me anyway.”

If you were a youth player today, would you come out of the closet?

“I don’t think about that in terms of coming out. I’m sure there are young people who play basketball today and are undecided, and I think that it’s important that they have tools that can deal with this situation. What is important is the personal feeling. I, at those ages, felt awful. You live in the closet and you live in fear. Nothing makes you feel nice. But the cliché is right, you only live once and it’s a pity for it not to be good. ”