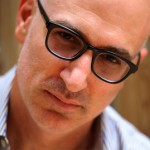 Eytan Fox has become one of Israel’s most prominent and most internationally acclaimed directors. His movies have been accepted and watched worldwide, won many awards, especially in LGBT film festivals.

Fox was born in New York City and moved with his family to Israel when he was two. He grew up in Jerusalem, served in the army, and studied at Tel Aviv University’s School of Film and Television. He is openly gay and many of his films contain themes of homosexuality, as well as the effect the Israeli–Palestinian conflict has on interpersonal relationships.

Fox’s first film was “After” (1990), a short film he directed as his final project at Tel Aviv University. The story deals with the sexual tension between a soldier and his commander, and this movie has significant characteristics of his future works: dismantling the myth of the macho-man Israeli soldier, concentrating on gay characters and coming out stories, and the use of music, especially Hebrew music, as an element that plays an important role in the film.

Fox and his partner, writer and journalist Gal Uchovsky, have been together for 24 years. They are also professional collaborators, as Uchovsky is involved in much of the scriptwriting for Fox’s movies. Fox also often collaborates with musician Ivri Lider on the soundtracks of his films.