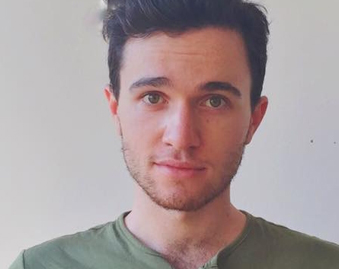 James McDonald had worked at popular LGBT magazines Out Magazine and The Advocate before he realized that he wanted to follow his passion and work as an activist. Now, while working with OneVoice, a nonprofit dedicated to realizing a two-state solution, he’ll be joining A Wider Bridge’s Leadership Mission to Israel this November. In a pre-Mission interview with us, he talked about his impression of Israel as an activist and as a gay man.

“My interest in Israel and my LGBT advocacy are very much connected,” admits James McDonald from New York, who takes part in A Wider Bridge’s 2016 Israel Leadership Mission. “It was actually on a trip to Israel that the seeds of LGBT activism were first sown. I was 16 years old, very much not out, and the Jerusalem Pride Parade wound its way directly past our hotel. Just a year after Shlissel first attempted to kill participants, I stood with others my own age and watched a relatively subdued procession of men and women make their way through the ancient city, flanked by thousands of soldiers and police. Their bravery to continue on despite the threat—it was really inspiring.”

McDonald, 25, came out at 17, with the exact moment being decided in large part to the fact that he had been invited to a prom as a guy’s date. “I figured it’d be a good idea to beat my Facebook feed to the punch,” he laughs. “I was hugely fortunate in that, to this day, I don’t think I’ve faced any particular hardship or been subject to any serious negativity on account of my sexuality-or at least none that I have felt personal enough to notice. My family and friends were all proud and supportive, and coming out enabled me to grow into a more confident and empathetic person. Seeing, however, how stark the differences can be between my experience and those of others—that’s been a huge motivator in my decision to advocate for change.”

McDonald definitely used his influence as a news editor at the biggest LGBT magazines in America to create awareness for the LGBTQ struggle in different parts of the world. “Working at Out Magazine and The Advocate, I was able to contribute and support from the sidelines,” he says. “I profiled activists from Syria and Israel and Iran, I reported on the struggle for equal rights in Ireland and the United States and India, and I did what I could generally to amplify the voices of those struggling to be heard, of those striving to break free from the shackles of oppression. As a Jew and as a gay man, I don’t really see the need to distinguish between our struggles, between anyone’s struggles—we’re all invested in the same fight, the fight for justice and equality and the right to live free from persecution. Victory on any front is a victory for all of us, and none of us will be done fighting until we all achieve victory.”

McDonald had been familiar with A Wider Bridge before becoming aware of the possibility of joining an LGBT delegation to Israel, and was really encouraged by what he saw. “The event I attended in New York City, where AWB hosted the Ethiopian-Israeli LGBT organization KALA, blew me away. It was so refreshing to see see diversity celebrated in a way that can be rare in LGBT circles, let alone in Jewish LGBT circles. To hear men and women sharing their stories, highlighting racial and cultural divides within their country and the ways they’re working to overcome them, and to listen to them describe the ways their parents’ and grandparents’ journeys to Israel so closely mirrored that of the Biblical exodus—and all of this during Passover, no less—was a really special experience. That’s what I’m most looking forward to on this trip, exploring the richness of the LGBT experience in Israel, and the various groups—secular, orthodox, Palestinian citizens of Israel, Palestinian, Ethiopian, Asheknazi, Mizrahi—that call the LGBT community home.”

What do you think are the biggest challenges of Israel on LGBT issues (and in general) nowadays?

“I believe that Israel’s greatest challenge on all fronts—from LGBT rights to the Israeli-Palestinian conflict—is the disproportional influence of the religious right. It is the codification of religious law at the expense of democratic principles that prevents same-sex marriage (or even Jewish-Arab marriage), that forces the segregation of the sexes at the Kotel, and that creates an environment which allows for the nationalist fervor of relatively small extremist elements within society to feed the settlement movement and justify the continued occupation of a people with national aspirations, just as we once had. Israel must live up to its own democratic ideals; it must celebrate the incredible diversity of its population and embrace the plurality of the human experience; and it must end the occupation.”

Having worked in LGBT media, James believes that interest in Israel has a couple of explanations. “Perhaps most obviously, Israelis have a reputation for being incredibly beautiful,” he explains, “and you only need to take a few steps down the street or beach in Tel Aviv to realize just how true that is. I also think, though, that Israel offers a glimmer of what could be. That in the heart of the Middle East, Tel Aviv Pride attracts more than 100,000 attendees, that men can kiss and hold each other on the shores of the Mediterranean—it hints at the possibility of such openness flowing across the region. For Middle Easterners especially, I think Israel can be of particular interest in that regard. Of course, Israel still has a way to go, but it’s proof that gay people can thrive anywhere, even in the deserts of the Middle East.”