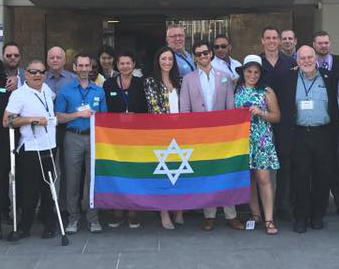 The 2016 A Wider Bridge LGBTQ Leadership Mission to Israel began less than 36 hours after the results of our election had been made clear. What can we learn from these experiences that can help us when we get back home? What advice do the Israelis have for us? How does one move forward with the work of social justice in a country ruled by the right? Halfway through the group’s journey, A Wider Bridge’s Executive Director, writes. 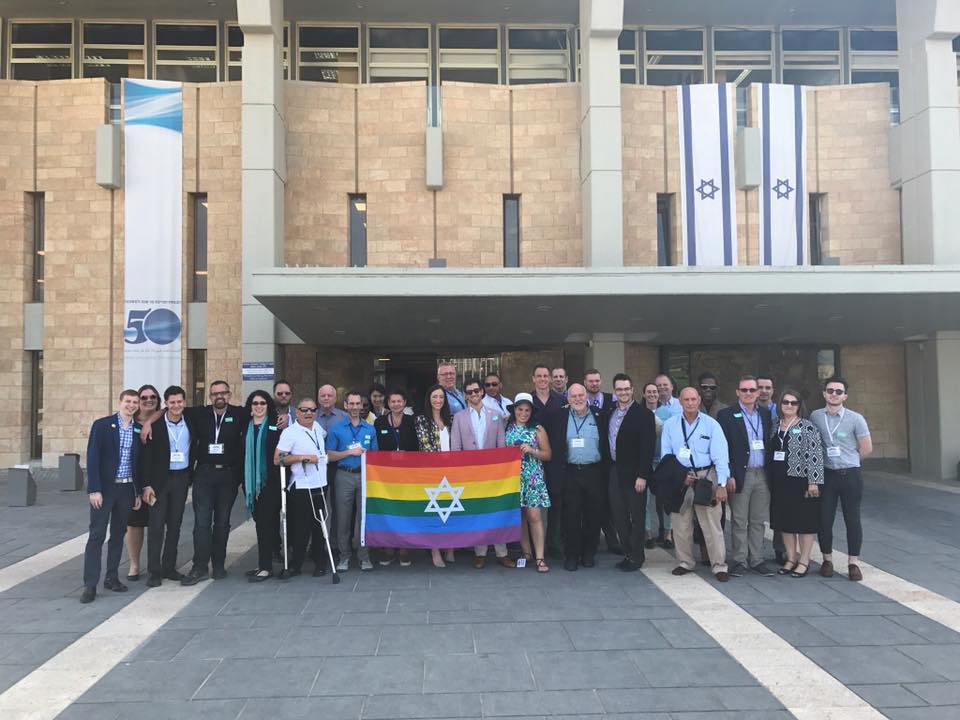 This is not the trip we imagined it would be. 30 progressive LGBTQ leaders, Jews and non-Jews, from across the United States began our journey together in Jerusalem Thursday evening, November 10, less than 36 hours after the results of our election had been made clear.

Under the auspices of A Wider Bridge, we came to meet and show our support for Israel’s LGBTQ community, and to deepen our understanding of the complex issues facing this country, both internally and in its relationship with its neighbors, and especially the conflict with the Palestinians. Yet as we seek to learn about the land we have arrived in, it seems clear that we are equally concerned with learning about ourselves, and the country we left rather abruptly last week, after an election whose outcome none of us anticipated and has left many of us shocked and grief-stricken.

We arrived in a country that has been ruled by a right wing coalition government for the past decade, expecting that we would be celebrating our first black president passing the torch to our first female president, with a rejection of the xenophobia, misogyny, racism, anti-semitism and homophobia that characterized much of the campaign of the man who is now our president – elect. As we meet with Israeli leaders and activists, we find ourselves turning the focus back to ourselves — what can we learn from these experiences that can help us when we get back home. What advice do the Israelis have for us? How does one move forward with the work of social justice in a country ruled by the right?

We visited Yad Vashem, Israel’s Holocaust memorial, and its story of how the insidious rise of anti-Semitism in the in Germany of the 1920s and 1930s gave rise to the Nazis seemed to hold too many scary parallels with some of what we are witnessing today in the United States.

So how are we holding up? Where are we finding comfort and wisdom to bring back with us? Interestingly, though most of our participants are not Jewish, many of the Israelis we are meeting with are offering us lessons from ancient Jewish texts, and these words are resonating. It seems the Jewish people have had some accumulated experience in living through challenging times.

On our first morning, a scholar at the Hartman institute offered us this 2000 year old teaching from Rabbi Tarfun: “it is not upon you to finish the task, but neither are you free to desist from it.” We met with Rabbi Noa Sattath of the Israel Religious Action Center, who counseled us that the only answer is to continue to do good work and the right things, even if certain goals and outcomes seem further out of reach now than they appeared a week ago. Another rabbi offered us a teaching based on this week’s Torah portion , Lech L’cha, in which God instructs Abraham to leave the home he is familiar with and set out on a journey to a place he knows nothing about. “Sometimes we have to just keep putting one foot in front of the other, even if we may not feel certain about where the path is leading us.” And finally, we were offered the teaching of Rabbi Nachman of Breslov, a late 18th century Hasidic scholar who wrote: “All the world is a narrow bridge, but the essential thing is not to be afraid.”

We are halfway through our journey together, and it feels as if we are a bit less afraid. We are gaining strength from each other, and from the wisdom of ancient Jewish sages and texts. Our last stop today was in the Arab city of Nazareth, where we visited an organization called Polyphony.

Polyphony provides education and training in classical music to Jewish and Arab children together. We heard performances by children ranging in age from 9 to 16. The last performance was a remarkable violin duet performed by two 16 year old teens, one Jewish and one Arab. The work helps bring music education to many children who might not otherwise receive it, and to build friendships and connections among Jews and Arabs.

This work gave us a message of hope that we sorely needed. So now, as we are halfway through our trip, it seems there is a bit less fear and a bit more hope. And our journey continues.