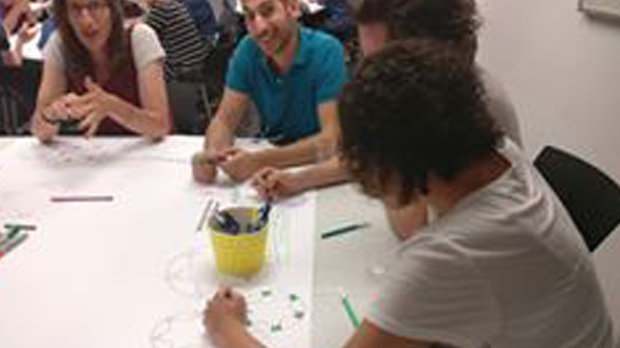 Rachel M. recently attended “Erev Kehila” a Jerusalem community event for religious families geared to parents and their LGBTQ children. She was moved to hear how parents quickly became advocates for their children. These are her reflections on the evening.

“Parents of LGBTQ kids need to come out of the closet, too.” That sentence has stayed with me ever since the community event I attended in Jerusalem last week.

I’m new to the world of LGBTQ; my daughter came out of the closet just a year ago. Last week my husband, daughter and I attended “Erev Kehila” a community event for religious families –this time dedicated to parents and their LGBTQ kids. The event was led by Nadav Schwartz and Reli Berkovich, and brought together parents and kids from all over Israel. It was a meaningful first step for my family, spending an evening out of the house focused on this aspect of our daughter’s identity.

I was struck by how open and friendly everyone was, how eager to connect and how willing to listen. In the first part of the evening, participants were seated in groups facing one another, in order to do an elaborate “speed dating” sort of activity, in which all participants could choose to talk about themselves, their family, or “the closet.”

Everyone had 90 seconds in which to share, before changing places to interact with another set of listeners. Everyone had a chance to speak and be heard, and to listen as others shared. I was moved to hear the accounts of grown children coming out of the closet to their parents; moved to hear parents describing the moment of coming out and its impact on them. I was warmed by the encouraging smiles of those who listened to me as I found the words to share my own experience.

In the second part of the evening, parents and kids split up and worked together brainstorming ideas for a brochure to help parents and kids when a kid comes out of the closet. I felt I had a safe space to share my feelings, questions, and concerns with other parents, and I was touched by some of things I heard other parents say. One mother said that after her child came out, she felt honored that God had entrusted her with this child – she took it as a sign that God has faith in her abilities to hold and care for this child. Her perspective left me feeling empowered and energized. I was moved to hear how parents quickly became advocates for their children.

In the final part of the evening, all participants sat in a large circle, and the floor was opened for dialogue. One mother asked the very question which I had heard my husband ask in our parent circle earlier in the evening; a question he hesitated to ask our daughter directly. I was gratified when our daughter answered the other mother, and when other children chimed in with their own different answers to the same question. I felt that a wide range of experiences of both parents and children were given voice.

The event felt significant. As a parent of an LGBTQ daughter, my focus has been on figuring out what my child needs, and how we as a family can see her, and meet her needs. This event reminded me that the parents of LGBTQ kids are also going through a process, and are in need of support and community as well. It was validating for me to hear the experiences of other parents; to speak; to feel seen and encouraged. I can’t wait for the next event.