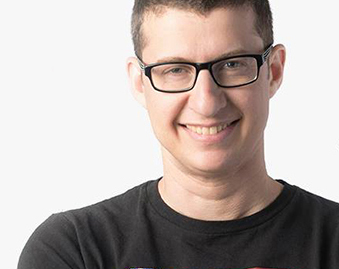 Elisha Alexander, 41, lives in Tel-Aviv, serves as the founding director of Ma’avarim, the NGO for the Israeli Transgender community. Before he begins a series of talks around the U.S.  on Monday, here’s a tip of the toe of the work he’s done for the transgender community in Israel. 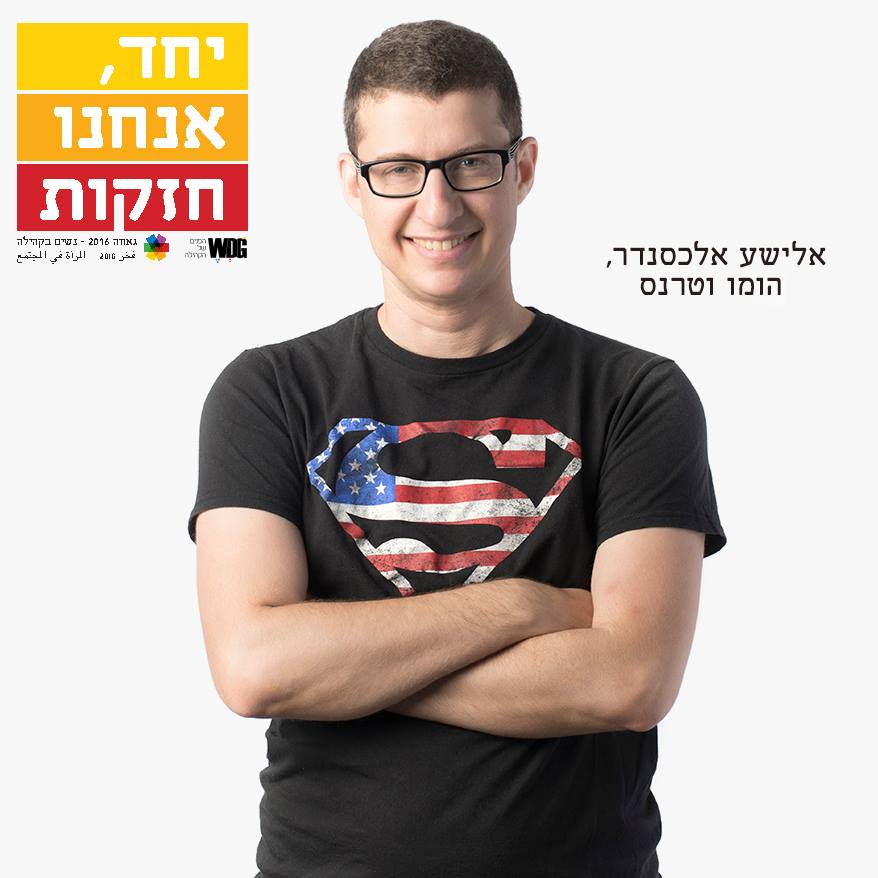 Coming out as trans at the age of 30, Elisha mobilized grassroots transgender activism in Israel today, promoting much needed trans visibility. A relentless community organizer, he has produced everything from trans-friendly S&M play parties, to Transgender Remembrance Day vigils, drag festivals, drag king calendars, the first and second radical queer march (alternative to Tel Aviv municipality Gay Pride parade), and alternative radical queer parties. Elisha is also one of the founders of the Green Bloc for trans visibility, as well as Gila Project.

For months, organization Maavarim has worked on aggregating as much information as possible in order to make this information accessible to everyone who needs it. The organization works regularly with members of the trans community, with rigorous collection of information and data from a variety of the life experiences of each one. “The goal is identifying recurring patterns and difficulties faced by transgenders before, during and after the process of changing sex, gender indecision and anything that we as a center of information can assist or advise about,” Elisha says. read more here

March 2016: Elisha educated the Emergency Room staff of the Sourasky Medical Center, the main hospital serving Tel Aviv, about sensitivities and attention towards transgender patients. Before you do any exam – explain what is about to happen. Also, be sensitive to body and nudity issues, be sensitive towards privacy of medical information (and transgender is medical information that is not appropriate to reveal without purpose), and of course, referring to the patient in the wanted gender and name, and find solutions in cases where there’s gender divisions.” Read more

January 2016: According to Elisha, Maavarim hears from 60 people a month,” and it’s true that there are some positive trends, and the state does a lot, and there’s no violence on the scale that exists in other places. But there is a lot more work to be done.” Read more

December 2015: After a 21-year-old transgender man commits suicide, Elisha called out the Israeli authorities: “We demand urgent solutions, such as emergency apartments for trans people, changing of transphobic procedures in the Interior Ministry, Ministry of Health and others. Our blood is not forfeit. We urge trans people – don’t stay alone! Contact Maavarim and people who can provide mental help. Share your feelings with your friends and family.” read the story

June 2015: Elisha was a key player in influencing the Tel Aviv Municipality to dedicate the highly popular Tel Aviv Pride to the transgender community. “It puts a focus on the community and a focus on the important issues that we face,” he said. Read the story

May 2015: Following an incident where a 2-year-old who was born intersex was sent home after the doctors decided to remove the male genitalia and leave the baby only with female genitalia, Elisha protested. “This surgery is totally unacceptable,” he said. read the story

December 2014: Elisha writes an op-ed about exposing little children to drag queens. “It is important that children be exposed to gender diversity at an early age. Children really don’t care about gender – it’s their environment that teaches them the opposite; there’s blue and there’s pink, there are toys for boys and toys for girls, there’s a father who beats his son because he’s too feminine, or a girl who is not allowed to play soccer, there are movies, shows, and programs for children that tell us how girls should behave, and that boys don’t cry. Therefore, early exposure to a drag queen is important, if only to resist the pressures that are exerted on little children.” read the story

November 2014: Elisha initiates a self-defense course for transgender people. “The trans community and gender-different people deal with specific situations that the general population doesn’t deal with,” says Alexander, “Most of the course doesn’t deal with ‘How to hit back,’ but how to get out of dangerous situations that are relevant to the trans community, so it is important to the formation of this special course.” read the story

May 2014: Elisha Alexander spoke in the Israeli press about another achievement of the trans community: Making the Health Ministry ease the criteria for sex change operations in Israel. read the story

April 2014: Elisha joins other LGBT leaders in taking part in a community-wide social media campaign: ‘Equality is For All of Us.’ read the story

November 2013: Elisha meets with then-Health Minister and Member of Knesset Yael German, senior professional staff of the Ministry of Health, and assistant to Health Minister Assaf Weiss, who organized the meeting. read the story

July 2013: A Wider Bridge brings Elisha Alexander for the first time to a talk in San Francisco, following the documentary “The Man I Am” in which he takes part. read the story