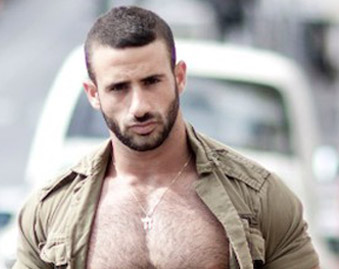 Welcome to Gay-ville, population: you and everyone you know. With Eliad Cohen as the scruffy marketing and PR face behind Gay-ville.com, a gay-owned and operated community marketplace for people to list, discover, and book gay-friendly accommodations around the world whether it be a vacation home, apartment, a room or even a sofa.

Gay-ville was launched during last year’s Tel Aviv Pride, the brand has steadily carved out its niche in the vacation rental market as a spunky cross between European Bed & Breakfast (EBAB.de) and AirBNB.com. “We have all traveled and had to deal with bad situations at hotels or not having any inside information of what to do,” explains Cohen. “Now there’s no question. We know what gays like and where they want to be — in the center of it all. And at ease.” That attitude — not to mention a score of winking YouTube commercials that typically end with a near-naked Cohen sexing up your screen, often with the comedic assistance of Gila Goldstein, Israel’s first transsexual and a Rubenesque force of nature — has grown a base of 50 initial hosts to more than 2,500 properties in 360 cities and 64 countries around the globe.

Read the full article on Out magazine