A tasting tour aims to bridge community connections between Israelis and immigrants in Neve Shaanan. 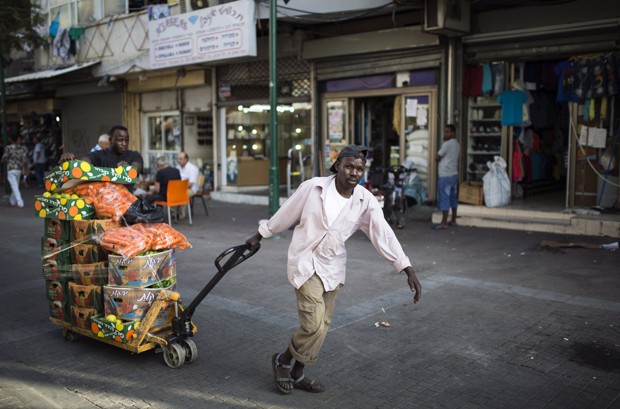 At a small Asian grocery store, right next to Tel Aviv’s brutalist Central Bus Station, I munched on salted sheets of seaweed while Dani, the Israeli proprietor, explained how he would carve up Jerusalem under a peace agreement. The shop specializes in Asian products scarce in Israel, and the shelves were lined with tamarind paste and fish sauce intended to ease the homesickness of a largely invisible clientele.

Tel Aviv’s Neve Shaanan neighborhood is a magnet for temporary foreign workers from China, India, and the Philippines, as well as non-Jewish asylum seekers from Eritrea and Sudan. The area is home to a permanent underclass many Israelis prefer not to see firsthand. It’s typically associated with crime and poverty. But a new food tour—Taster’s Tour of Foreign Workers’ Kitchens—hopes to expose both Israelis and foreigners to the bittersweet realities of life in the shadow of Tel Aviv’s better-known beaches and Bauhaus architecture.

The Taster’s Tour isn’t a comprehensive study in migrant life, nor does it offer any particular historical or political expertise. What it does offer is conversation with often-marginalized groups typically ignored by locals and tourists alike. Founder Roni Lederman promotes the tour as a way to encourage openness and integration. But it’s also raising questions about gentrification and the exclusions of Israeli identity.

n many places, a community like Neve Shaanan might be seen as a problem of integration. But in Israel’s ethno-national state, there is no melting pot or mosaic into which the children of Eritrean asylum seekers and Filipino caregivers will be easily absorbed.