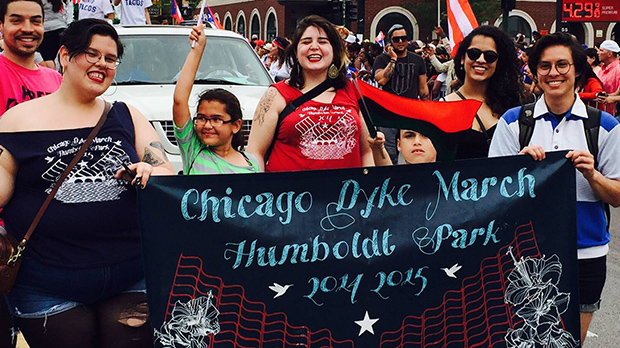 It was only a matter of time before they came for the Jews.

Last weekend, organizers of Chicago’s Dyke March asked three participants carrying Jewish LGBT pride flags—a Star of David embossed over the traditional rainbow—to leave. “It was a flag from my congregation which celebrates my queer, Jewish identity,” Laurel Grauer told the Windy City Times. According to the paper, Grauer “lost count of the number of people who harassed her” at the festival. The only other individuals to be treated in such fashion were a contingent of Christian anti-gay activists, whom marchers surrounded with “sheets of tarpaulin, trans pride flags and bed linen” so that their hateful signs could not be seen.

Asked to explain why they would kick Jews out of their event, Dyke March organizers were unapologetic and unambiguous. The flags, they explained, “made people feel unsafe” and the march was “anti-Zionist.” Forget equating a piece of cloth with an act of physical intimidation, an illustration of the hysterical progressive rhetoric that likens speech to “violence.” There was nothing “Zionist” about the allegedly threatening flag (other than its containing the Star of David, which also appears on the Israeli flag). What made these people “feel unsafe” was the presence of Jews. Censoring this Jewish symbol, meanwhile, organizers were perfectly content to let participants wave the flag of Palestine, a political entity where LGBT people are routinely harassed and murdered.

This incident calls to mind another occurrence in Chicago. In 2016,  a howling mob descended upon a Shabbat service at the National LGBTQ Task Force convention hosted by A Wider Bridge, a group that strengthens relationships between the Israeli and North American LGBT communities. That assault, directed at an organization explicitly involved in promoting Israel, at least had the pretense of being “anti-Zionist.” What happened last weekend in Chicago was nothing less than anti-Semitic.

For years, battles have raged in various cities over whether anti-Israel activists should be permitted to march in gay pride parades. Groupuscules like Queers Undermining Israeli Terrorism (QUIT) and Queers Undermining Israeli Apartheid have forced their way into events ostensibly intended to celebrate LGBT community, not single out the world’s sole Jewish state for censure. Now, the effort has shifted from inserting anti-Israel activism into the gay rights movement to outright discriminating against Jews. Continue reading on Tablet