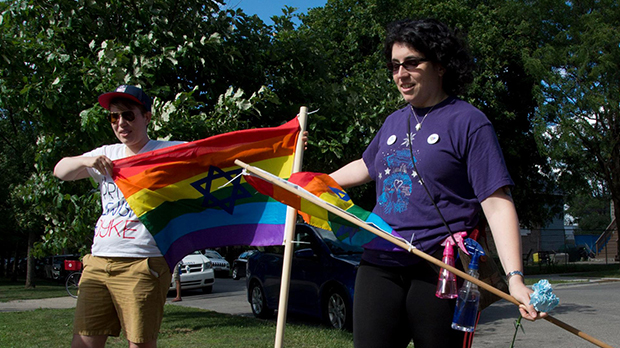 Back in June, Midwest Manager of A Wider Bridge, Laurie Grauer, was kicked out from the Chicago Dyke March for carrying a rainbow flag with the Jewish star of David on it. The incident caused a stir in both the Jewish and the LGBT communities at large. JTA marked this story as one of the top 10 stories that mattered to Jews in the current Jewish year that comes to an end.

As the year 5777 comes to a close, JTA looks back at some of the moments that had the most significance for Jews, sorted below by date.

In June, a Chicago lesbian march ejected three women for carrying Gay Pride flags with Jewish stars, saying the march was “anti-Zionist” and “pro-Palestinian.” The decision drew heated debate, and the Jewish reporter who first wrote about the incident for a Chicago LGBTQ newspaper said she was removed from her reporting job as a result of the article. The Dyke March controversy — as well as similar debates about the role of Zionists in the feminist movement and whether demonstrators could bring banners with Jewish stars to a Chicago feminist march — illuminated a growing challenge for Zionist Jews who feel unwelcome in liberal spaces.

Laurie Grauer will be speaking in two events taking place at the beginning of October in Palm Beach, Florida. Read more